When you're solving quadratics in your homework, you can often get a "hint" as to the best method to use, based on the topic and title of the section. For instance, if you're working on the homework in the "Solving by Factoring" section, then you know that you're supposed to solve by factoring. But in the chapter review and on the test, you don't know from which of your textbook's section a particular quadratic has been drawn. Which method should you use?

You could use the Quadratic Formula for everything, but the Formula can be time-consuming overkill. 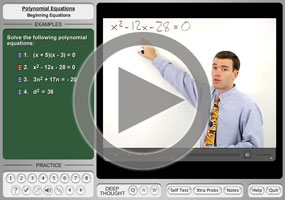 To solve this quadratic equation, I could multiply out the expression on the left-hand side, simplify to find the coefficients, plug those coefficient values into the Quadratic Formula, and chug away to the answer.

But why on Earth would I? I mean, for heaven's sake, this is factorable, and they've already factored it and set it equal to zero for me. While the Quadratic Formula would definitely give me the correct answer, why bother with it?

Instead, I'll just immediately solve the two factors they've given me:

That was quick! And my answer is:

By the way, there is no strict order for the solutions. Yes, I generally put my solutions in numerical order so, in the above case, the minus answer came before the plus answer. But, unless your instructor has said something (and I'd be amazed if this were the case), the above answer would be just as correct if it had been written as "x = 3, −1".

The quadratic expression on the left-hand side of the "equals" sign does not factor.

This quadratic has not been provided to me in "(variable part)2 equals (some number)", so solving by taking square roots is out.

I could solve this equation by completing the square, but that's tiresome and error-prone. I could try solving by doing a graph, but the best I'd be able to do is get a decimal approximation from my "software" (that is, my graphing calculator).

To get an exact answer, and to get that answer quickly, I'll use the Quadratic Formula:

Since the instructions didn't mention anything about decimal approximations, I'll leave my answer in square-root form:

This equation isn't set up for me as being ready for taking square roots, and I'm never gonna use completing the square unless they specifically tell me to. Before applying the Quadratic Formula, though, I'll first quickly check to see if the expression on the left-hand side of this equation is factorable.

And I'm done, just that quickly. My answer is:

Note: I could have moved the 4 over to the right-hand side of the equation, and then taken the square root of either side of x2 = 4. This method would have given me the exact same answer as the factoring done above. Unless specified otherwise, you should use whichever method you prefer.

The quadratic expression on the left-hand side of this equation might factor, but it looks like finding that factorization, if any, would be an unpleasant amount of work. I'm feeling a bit mindless and lazy at the moment, so I'll use the Quadratic Formula instead. As I work, I need to remember to put the ± in front of the radical, and to put the fraction line under the entire numerator, being the whole "b2 ± (the square root)" part:

The solution values are fractions with no radicals, which means the quadratic could have been factored. But I've got my answer now, so I don't care about factorization any more.

This quadratic expression has two terms, and nothing factors out, so either it's a difference of squares (which I can factor) or else it can be formatted as "(variable part)2 equals (a number)" so I can square-root both sides. Since 48 is not a square, I can't apply the difference-of-squares formula. Instead, I'll have to square-root both sides:

So my answer, in exact form, is:

This quadratic expression has two terms, and they factor easily:

Before I panic, I think about the one method of "solving" that doesn't involve an actual quadratic equation: solving by graphing.

When they want me to solve a quadratic equation by graphing, they're actually asking me to find the x-intercepts of the associated quadratic function. And, by "find", they mean "from the pretty picture". But the point is that they're wanting me to note the connection between the two, and provide then with the x-values for when y = 0.

I can do this from a picture, or I can do this from a T-chart of values. In this case, instead of a graph, they've given me a table. There are two points which have one of the coordinates equal to zero; namely, (0, 9) and (3, 0). Which of these is the one I want? The one that has y = 0, which is the second of the two points. And my solution is the corresponding x-value.

You won't likely see many, or maybe any, of this last sort of exercise.

By the way, if you're wondering why there was only one solution to that quadratic, it's because the (intended and underlying) equation was (x − 3)2 = 0. So the one solution was "repeated".

When solving quadratic equations in general, first get everything over onto one side of the "equals" sign (something that was already done in the above examples). Then first check to see if there is an obvious factoring or if there is an obvious square-rooting that you can do. If not, then it's usually best to resort to the Quadratic Formula. But don't use the Quadratic Formula for everything; while it will always give you the answer — eventually — it is not always the fastest method. And speed can count for a lot on timed tests.