Let's take another look at that last problem on the previous page:

On the previous page, I'd solved this quadratic equation by factoring the difference of squares on the left-hand side of the equation, and then setting each factor equal to zero, etc, etc. The solution was "x = ± 2". However—

I can also try isolating the squared-variable term on the left-hand side of the equation (that is, I can try getting the x2 term by itself on one side of the "equals" sign), by moving the numerical part (that is, the 4) over to the right-hand side, like this: 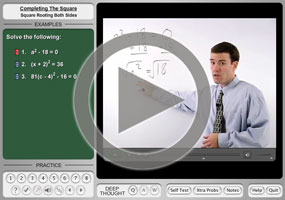 When I'm solving an equation, I know that I can do whatever I like to that equation as long as I do the exact same thing to both sides of that equation. On the left-hand side of this particular equation, I have an x2, and I want a plain old x. To turn the x2 into an x, I can take the square root of each side of the equation, like this:

Then the solution is x = ±2, just like it was when I solved by factoring the difference of squares.

Why did I need the "±" (that is, the "plus-minus") sign on the 2 when I took the square root of the 4? Because I'm trying to find all values of the variable which make the original statement true, and it could have been either a positive 2 or a negative 2 that was squared to get that 4 in the original equation.

This duality is similar to how I'd had two factors, one "plus" and one "minus", when I used the difference-of-squares formula to solve this same equation on the previous page.

Solving an equation, on the other hand — that is, finding all of the possible values of the variable that could work in an equation — is different from simply evaluating an expression that is already defined as having only one value.

Keep these two straight! A square-rooted number has only one value, but a square-rooted equation has two, because of the variable.

In mathematics, we need to be able to get the same answer, no matter which valid method we happen to have used in order to arrive at that answer. So, comparing the answer I got above with the answer I got one the previous page confirms that we must use the "±" when taking square roots to solve.

A benefit of this square-rooting process is that it allows us to solve some quadratics that we could not have solved before when using only factoring. For instance:

This quadratic has a squared part and a numerical part. I'll start by adding the numerical term to the other side of the equaion (so the squared part is by itself), and then I'll square-root both sides. I'll need to remember to simplify the square root:

Then my solution is:

This quadratic has a squared part and a numerical part. I'll start by adding the strictly-numerical term to the right-hand side of the equation, so that the squared binomial expression, containing the variable, is by itself on the left-hand side. Then I'll square-root both sides, remembering the "±" on the numerical side, and then I'll simplify:

This equation, after taking the square root of either side, did not contain any radcials. Because of this, I was able to simplify my results, all the way down to simple values. My answer is:

The previous equation is an example of a equation where the careless student will omit the "±" while solving, and will then have no clue as to how the book got the answer "x = −5, 15".

These students get in the bad habit of not bothering to write the "±" sign until they check their answers in the back of the book and suddenly "remember" that they "meant" to put the "±" in there when they'd taken the square root of either side of the equation.

But this "magic" only works when you have the answer in the back (to remind you) and when the solution contains radicals (which doesn't always happen). In other cases, there will be no "reminder". Especially on tests, making the mistake of omitting the "±" can be deadly. Don't be that student. Always remember to insert the "±".

By the way, since the solution to the previous equation consisted of integers, this quadratic could also have been solved by multiplying out the square, factoring, etc:

I can't simplify this any more. My answer is going to have radicals in it. My solution is:

This quadratic equation, unlike the one before it, could not have also been solved by factoring. But how would I have solved it, if they had not given me the quadratic already put into "(squared part) minus (a number part)" form? This concern leads to the next topic: solving by completing the square.