Somebody (possibly in seventh-century India) was solving a lot of quadratic equations by completing the square. At some point, he (and, yes, it would have been a guy back then) noticed that he was always doing the exact same steps in the exact same order for every equation.

The great power of algebra is that it provides us with the ability to deal with abstractions, such as formulas that always work. This can relieve us from the burden and messiness of having to muck about with the numbers every single time we do the exact same thing. Using this power with respect to solving quadratics by completing the square, he made a formula out of what he'd been doing; namely, the Quadratic Formula, which states: 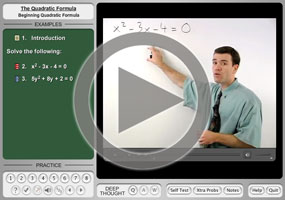 The Quadratic Formula: Given a quadratic equation in the following form:

...where a, b, and c are the numerical coefficients of the terms of the quadratic, the value of the variable x is given by the following equation:

Let's try that first problem from the previous page again, but this time we'll use the Quadratic Formula instead of the laborious process of completing the square:

The Quadratic Formula requires that I have the quadratic expression on one side of the "equals" sign, with "zero" on the other side. They've given me the equation already in that form. Also, the Formula is stated in terms of the numerical coefficients of the terms of the quadratic expression. Looking at the coefficients in this equation, I see that a = 1, b = −4, and c = −8. I'll plug these numbers into the Formula, and simplify. (I should get the same answer as I previously have.)

This is the same answer as I got before, which confirms that the Quadratic Formula works as intended. Once again, my final answer is:

The nice thing about the Quadratic Formula (as compared to completing the square) is that we're just plugging into a formula. There are no "steps" to remember, and thus there are fewer opportunities for mistakes. That being said:

Take care not to omit the "±" sign in front of the radical.

Don't draw the fraction line as being only under the square root, because it's under the initial "−b" part, too.

Don't forget that the denominator of the Formula is "2a", not just "2". That is, when the leading term is something like "5x2", you will need to remember to put the "a = 5" value in the denominator.

Use parentheses around the coefficients when you're first plugging them into the Formula, especially when any of those coefficients is negative, so you don't lose any "minus" signs.

First, I'll read off the values of the coefficients that I'll be plugging into the Formula:

Now all I have to do is plug these values into the Formula, and simplify to get my answer:

Absolutely nothing will simplify here, so I'm done. My answer is:

You should definitely memorize the Quadratic Formula. I don't care if your teacher says she's going to give it to you on the next test; memorize it anyway, because you'll be needing it later. It's not that long, and there's even a song to help you remember it, set to the tune of "Pop Goes the Weasel":

(The above song isn't original to me. I learned it elsewhere.)

When using the Formula, take the time to be careful because, as long as you do your work neatly, the Quadratic Formula will give you the right answer every time.

I have a lesson on the Quadratic Formula, which provides worked examples and shows the connection between the discriminant (the "b2 − 4ac" part inside the square root), the number and type of solutions of the quadratic equation, and the graph of the related parabola. If you're wanting more help with the Formula, then please study the lesson at the above hyperlink.