The "  " symbol used above is called the "radical"symbol. (Technically, just the "check mark" part of the symbol is the radical; the line across the top is called the "vinculum".) The expression "  " is read as "root nine", "radical nine", or "the square root of nine". 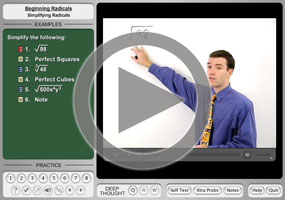 We can raise numbers to powers other than just 2; we can cube things (being raising things to the third power, or "to the power 3"), raise them to the fourth power (or "to the power 4"), raise them to the 100th power, and so forth. In the same way, we can take the cube root of a number, the fourth root, the 100th root, and so forth. Just as the square root undoes squaring, so also the cube root undoes cubing, the fourth root undoes raising things to the fourth power, et cetera. To indicate some root other than a square root when writing, we use the same radical symbol as for the square root, but we insert a number into the front of the radical, writing the number small and tucking it into the "check mark" part of the radical symbol. This tucked-in number corresponds to the root that you're taking. For instance, relating cubing and cube-rooting, we have:

The "3" in the radical above is called the "index" of the radical (the plural being "indices", pronounced "INN-duh-seez"); the "64" is "the argument of the radical", also called "the radicand". Perhaps because most of radicals you will see will be square roots, the index is not included on square roots. While "  " would be technically correct, I've never seen it used.

a square (second) root is written as:

a cube (third) root is written as:

a fourth root is written as:

a fifth root is written as:

We can take any counting number, square it, and end up with a nice neat number. But the process doesn't always work nicely when going backwards. For instance, consider , the square root of three. There is no nice neat number that squares to 3, so cannot be simplified as a nice whole number. We can deal with in either of two ways: If we are doing a word problem and are trying to find, say, the rate of speed, then we would grab our calculators and find the decimal approximation of :

Then we'd round the above value to an appropriate number of decimal places and use a real-world unit or label, like "1.7 ft/sec". On the other hand, we may be solving a plain old math exercise, something having no "practical" application. Then they would almost certainly want us to give the "exact" value, so we'd write our answer as being simply "".

Since most of what you'll be dealing with will be square roots (that is, second roots), most of this lesson will deal with them specifically.

To simplify a term containing a square root, we "take out" anything that is a "perfect square"; that is, we factor inside the radical symbol and then we take out in front of that symbol anything that has two copies of the same factor. For instance, 4 is the square of 2, so the square root of 4 contains two copies of the factor 2; thus, we can take a 2 out front, leaving nothing (but an understood 1) inside the radical, which we then drop:

Similarly, 49 is the square of 7, so it contains two copies of the factor 7:

On a side note, let me emphasize that "evaluating" an expression (to find its one value) and "solving" an equation (to find its one or more, or no, solutions) are two very different things. In the first case, we're simplifying to find the one defined value for an expression. In the second case, we're looking for any and all values what will make the original equation true.

So, for instance, when we solve the equation x2 = 4, we are trying to find all possible values that might have been squared to get 4. But when we are just simplifying the expression , the ONLY answer is "2"; this positive result is called the "principal" root. (Other roots, such as −2, can be defined using graduate-school topics like "complex analysis" and "branch functions", but you won't need that for years, if ever.)

Oftentimes the argument of a radical is not a perfect square, but it may "contain" a square amongst its factors. To simplify this sort of radical, we need to factor the argument (that is, factor whatever is inside the radical symbol) and "take out" one copy of anything that is a square. That is, we find anything of which we've got a pair inside the radical, and we move one copy of it out front. When doing this, it can be helpful to use the fact that we can switch between the multiplication of roots and the root of a multiplication. In other words, we can use the fact that radicals can be manipulated similarly to powers:

There are various ways I can approach this simplification. One would be by factoring and then taking two different square roots. In particular, I'll start by factoring the argument, 144, into a product of squares:

Then my solution is:

Another way to do the above simplification would be to remember our squares. You probably already knew that 122 = 144, so obviously the square root of 144 must be 12. But my steps above show how you can switch back and forth between the different formats (multiplication inside one radical, versus multiplication of two radicals) to help in the simplification process.

In case you're wondering, products of radicals are customarily written as shown above, using "multiplication by juxtaposition", meaning "they're put right next to one another, which we're using to mean that they're multiplied against each other". You could put a "times" symbol between the two radicals, but this isn't standard.

Neither of 24 and 6 is a square, but what happens if I multiply them inside one radical?

Now I do have something with squares in it, so I can simplify as before:

The argument of this radical, 75, factors as:

When writing an expression containing radicals, it is proper form to put the radical at the end of the expression. Not only is "" non-standard, it is very hard to read, especially when hand-written. Is the 5 included in the square root, or not? (In our case here, it's not.)

And take care to write neatly, because "" is not the same as "". You don't want your handwriting to cause the reader to think you mean something other than what you'd intended.

You don't have to factor the radicand all the way down to prime numbers when simplifying. As soon as you see that you have a pair of factors or a perfect square, and that whatever remains will have nothing that can be pulled out of the radical, you've gone far enough.

Since there had been only one copy of the factor 2 in the factorization 2 × 6 × 6, the left-over 2 couldn't come out of the radical and had to be left behind.

I could continue factoring, but I know that 9 and 100 are squares, while 5 isn't, so I've gone as far as I need to. I'm ready to evaluate the square root:

Yes, I used "times" in my work above. No, you wouldn't include a "times" symbol in the final answer. I was using the "times" to help me keep things straight in my work. I used regular formatting for my hand-in answer. When doing your work, use whatever notation works well for you.