When simplifying, you won't always have only numbers inside the radical; you'll also have to work with variables. Variables in a radical's argument are simplified in the same way as regular numbers. You factor things, and whatever you've got a pair of can be taken "out front".

I already know that 16 is 42, so I know that I'll be taking a 4 out of the radical. Looking then at the variable portion, I see that I have two pairs of x's, so I can take out one x from each pair. Then: 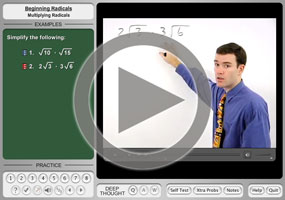 Looking at the numerical portion of the radicand, I see that the 12 is the product of 3 and 4, so I have a pair of 2's (so I can take a 2 out front) but a 3 left over (which will remain behind inside the radical).

Looking at the variable portion, I have two pairs of a's; I have three pairs of b's, with one b left over; and I have one pair of c's, with one c left over. So the root simplifies as:

Writing out the complete factorization would be a bore, so I'll just use what I know about powers. The 20 factors as 4 × 5, with the 4 being a perfect square. The r18 has nine pairs of r's; the s is unpaired; and the t21 has ten pairs of t's, with one t left over. Then:

Technical point: Your textbook may tell you to "assume all variables are positive" when you simplify. Why? Because the square root of the square of a negative number is not the original number.

For instance, you could start with −2, square it to get +4, and then take the square root of +4 (which is defined to be the positive root) to get +2. You plugged in a negative and ended up with a positive.

We're applying a process that results in our getting the same numerical value, but it's always positive (or at least non-negative). Sound familiar? It should: it's how the absolute value works: |−2| = +2. Taking the square root of the square is in fact the technical definition of the absolute value.

But this technicality can cause difficulties if you're working with values of unknown sign; that is, with variables. The |−2| is +2, but what is the sign on | x |? You can't know, because you don't know the sign of x itself — unless they specify that you should "assume all variables are positive", or at least non-negative (which means "positive or zero").

The first thing you'll learn to do with square roots is "simplify" terms that add or multiply roots.

Simplifying multiplied radicals is pretty simple, being barely different from the simplifications that we've already done. We use the fact that the product of two radicals is the same as the radical of the product, and vice versa.

Because 6 factors as 2 × 3, I can split this one radical into a product of two radicals by using the factorization. (Yes, I could also factorize as 1 × 6, but they're probably expecting the prime factorization.)

Yes, that manipulation was fairly simplistic and wasn't very useful, but it does show how we can manipulate radicals. And using this manipulation in working in the other direction can be quite helpful. For instance:

When multiplying radicals, as this exercise does, one does not generally put a "times" symbol between the radicals. The multiplication is understood to be "by juxtaposition", so nothing further is technically needed.

To do this simplification, I'll first multiply the two radicals together. This will give me 2 × 8 = 16 inside the radical, which I know is a perfect square.

By the way, I could have done the simplification of each radical first, then multiplied, and then does another simplification. The work would be a bit longer, but the result would be the same:

Neither of the radicals they've given me contains any squares, so I can't take anything out front — yet. What happens when I multiply these together?

As these radicals stand, nothing simplifies. However, once I multiply them together inside one radical, I'll get stuff that I can take out, because:

The process works the same way when variables are included:

You can use the Mathway widget below to practice simplifying products of radicals. Try the entered exercise, or type in your own exercise. Then click the button to compare your answer to Mathway's.