Just as with "regular" numbers, square roots can be added together. But you might not be able to simplify the addition all the way down to one number. Just as "you can't add apples and oranges", so also you cannot combine "unlike" radical terms.

In order to be able to combine radical terms together, those terms have to have the same radical part. 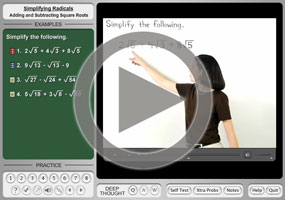 Since the radical is the same in each term (being the square root of three), then these are "like" terms. This means that I can combine the terms.

I have two copies of the radical, added to another three copies. This gives mea total of five copies:

That middle step, with the parentheses, shows the reasoning that justifies the final answer. You probably won't ever need to "show" this step, but it's what should be going through your mind.

The radical part is the same in each term, so I can do this addition. To help me keep track that the first term means "one copy of the square root of three", I'll insert the "understood" "1":

To simplify a radical addition, I must first see if I can simplify each radical term. In this particular case, the square roots simplify "completely" (that is, down to whole numbers):

I have three copies of the radical, plus another two copies, giving me— Wait a minute! I can simplify those radicals right down to whole numbers:

Don't worry if you don't see a simplification right away. If I hadn't noticed until the end that the radical simplified, my steps would have been different, but my final answer would have been the same:

There is not, to my knowledge, any preferred ordering of terms in this sort of expression, so the expression should also be an acceptable answer.

As given to me, these are "unlike" terms, and I can't combine them. But the 8 in the first term's radical factors as 2 × 2 × 2. This means that I can pull a 2 out of the radical. At that point, I will have "like" terms that I can combine.

I can simplify most of the radicals, and this will allow for at least a little simplification:

These two terms have "unlike" radical parts, and I can't take anything out of either radical. Then I can't simplify the expression any further and my answer has to be:

To expand this expression (that is, to multiply it out and then simplify it), I first need to take the square root of two through the parentheses:

As you can see, the simplification involved turning a product of radicals into one radical containing the value of the product (being 2 × 3 = 6). You should expect to need to manipulate radical products in both "directions".

As in the previous example, I need to multiply through the parentheses.

It will probably be simpler to do this multiplication "vertically".

By doing the multiplication vertically, I could better keep track of my steps. You should use whatever multiplication method works best for you. But know that vertical multiplication isn't a temporary trick for beginning students; I still use this technique, because I've found that I'm consistently faster and more accurate when I do.

You can use the Mathway widget below to practice finding adding radicals. Try the entered exercise, or type in your own exercise. Then click the button to compare your answer to Mathway's.