Sometimes you will need to multiply multi-term expressions which contain only radicals. This is a situation for which vertical multiplication is a wonderful help.

This exercise looks ugly, but it's perfectly do-able, as long as I'm neat and precise in my work.

First, I do the multiplication, using the vertical method to keep things straight: 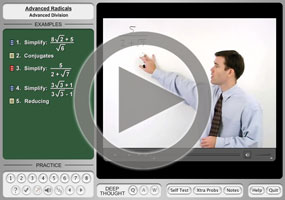 Then I set the original expression equal to the last line from the multiplication above, and complete the calculations by simplifying each term:

First I do the multiplication:

And then I simplify:

Note in the last example above how I ended up with all whole numbers. (Okay, technically they're integers, but the point is that the terms do not include any radicals.) I multiplied two radical binomials together and got an answer that contained no radicals. You may also have noticed that the two "binomials" were the same except for the sign in the middle: one had a "plus" and the other had a "minus".

To create the conjugate, all you do is flip the sign in the middle. Everything else remains the same.

This time, the radical is in the first of the two terms, and there's a "minus" in front of the first term. That's fine. I'll leave the first "minus" alone, because I don't change any but the middle sign; I'll flip the second "minus" in the middle to a "plus":

When we multiply the factors a + b and a – b, the middle "ab" terms cancel out:

The same thing happens when we multiply conjugates:

We will see shortly why this matters. To get to that point, let's first take a look at fractions containing radicals in their denominators.

I can simplify this by working inside, and then taking the square root:

...or else by splitting the division into two radicals, simplifying, and cancelling:

Either way, my final answer is the same.