Exponents, also called powers or orders, are shorthand for repeated multiplication of the same thing by itself. For instance, the shorthand for multiplying three copies of the number 5 is shown on the right-hand side of the "equals" sign in (5)(5)(5) = 53. The "exponent", being 3 in this example, stands for however many times the value is being multiplied. The thing that's being multiplied, being 5 in this example, is called the "base". 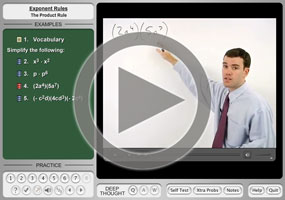 What are the rules for simplifying with exponents?

The rules for simplifying with exponents are as follows:

Now, what do these rules mean? In what follows, I will illustrate each rule, so you can see how and why the rules work. Once you understand the "why", it's usually pretty easy to remember the "how".

To simplify this, I can think in terms of what those exponents mean. "To the third" means "multiplying three copies" and "to the fourth" means "multiplying four copies". Using this fact, I can "expand" the two factors, and then work backwards to the simplified form.

Now I can remove the parentheses and put all the factors together:

Counting up, I see that this is seven copies of the variable. "Multiplying seven copies" means "to the seventh power", so this can be restated as:

Putting it all together, the steps are as follows:

Whenever you multiply two terms with the same base, you can simplify by adding the exponents:

Now that I know the rule (namely, that I can add the powers on the same base), I can start by moving the bases around to get all the same bases next to each other:

Now I want to add the powers on the a's and the b's. However, the second a doesn't seem to have a power. What do I do for this factor?

Anything that has no explicit power on it is, in a technical sense, being "raised to the power 1". Anything to the power 1 is just itself, since it's "multiplying one copy" of itself. So the expression above can be rewritten as:

Now I can combine:

Putting it all together, my hand-in work would look like this:

In the following example, there are two powers, with one power being "inside" the other, in a sense.

Each factor in the above expansion is "multiplying two copies" of the variable. This expands as:

Removing the parentheses, I get:

This is a string of eight copies of the variable. "Multiplying eight copies" means "to the eighth power", so this means:

Putting it all together:

Whenever you have an exponent expression that is itself raised to a power, you can simplify by multiplying the outer power on the inner power:

If you have a product inside parentheses, and a power on the parentheses, then the power goes on each element inside. For instance:

Another example would be:

Note: This rule does NOT work if you have a sum or difference within the parentheses. Exponents, unlike mulitiplication, do NOT "distribute" over addition.

When in doubt, write out the expression according to the definition of the power. For instance, given (x − 2)2, don't try to do this in your head. Instead, write it out; "squared" means "multiplying two copies of", so:

The mistake of erroneously trying to "distribute" the exponent is most often made when students are trying to do everything in their heads, instead of showing their work. Do things neatly, and you won't be as likely to make this mistake.

Now that I know the rule about powers on powers, I can take the 4 through onto each of the factors inside. (I'll need to remember that the c inside the parentheses, having no explicit power on it, is to be viewed as being raised "to the power of 1".)

To simplify this, I'll first expand each of the numerator and the denominator.

Obviously, two copies of the factor a are duplicated, so I can cancel these off:

(Remember that, when "everything" cancels, there is still the understood, but usually ignored, factor of 1 that remains.)

I can ignore the 1 underneath, and can apply the definition of exponents to simplify down to my final answer:

Whenever you have the same base in each of the numerator and denominator of a fraction, you can simplify by subtracting the powers:

(Yes, this rule can lead to negative exponents. You'll learn how to deal with them on the next page.)

There is one other rule that may or may not be covered in your class at this stage:

Anything to the power zero is just 1 (as long as the "anything" it not itself zero).

This rule is explained on the next page. In practice, though, this rule means that some exercises may be a lot easier than they may at first appear:

Who cares about that stuff inside the square brackets? I sure don't, because the zero power on the outside means that the value of the entire thing is just 1. Ha!

By the way, as soon as your class does cover "to the zero power", you should expect an exercise like the one above on the next test. It's a common trick question, designed to make you waste a lot of your limited time — but it only works if you're not paying attention.

You can use the Mathway widget below to practice simplifying expressions with exponents. Try the entered exercise, or type in your own exercise. Then click the button to compare your answer to Mathway's. (Or skip the widget and continue with the lesson, or review loads of worked examples here.)

Click here to be taken directly to the Mathway site, if you'd like to check out their software or get further info.