We have three basic rules for combining exponents:

However, when simplifying expressions containing exponents, don't feel like you must work only with, or straight from, these rules. It is often simpler to work directly from the meaning of exponents. 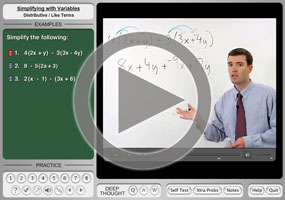 Whem I multiply these two expressions together, I will get eleven copies of a multiplied together. That is:

Unless the instructions also tell you to "evaluate", you're probably expected to leave numerical exponent problems like this in exponent form. If you're not sure, though, feel free to add "= 216", just to be on the safe side.

How many extra copies of t do I have, and where are they? I have two extra copies, on top:

Once you become comfortable with the "how many extras do I have, and where are they?" reasoning, you'll find yourself not needing to write things out and cancel off the duplicate factors. The answers will start feeling fairly obvious to you.

This question is a bit different, because the larger exponent is on the term in the denominator. But the basic reasoning is the same.

How many extra copies of 5 do I have, and where are they? I have six extra copies, and they're underneath:

Note: If you apply the subtraction rule, you'll end up with 53−9 = 5−6, which is mathematically correct, but is almost certainly not the answer they're looking for.

Whether or not you've been taught about negative exponents, when they say "simplify", they mean "simplify the expression so it doesn't have any negative or zero powers". Some students will try to get around this minus-sign problem by arbitrarily switching the sign to magically get " 56 " on top (rather than below a "1"), but this is incorrect.

Let's move on to expressions that are a bit more complex.

For the variables, I have two extra copies of x on top, so the answer is:

Either of the purple highlighted answers should be acceptable: the only difference is in the formatting; they mean the same thing.

This is simple enough: anything to the zero power is just 1.

The parenthetical portion still simplifies to 1, but this time the "minus" is out in front of the parentheses; that is, it's out from under the power, so the exponent doesn't touch it. So the answer in this case is:

I can cancel off the common factor of 5 in the numerical part of the fraction:

Now I need to look at each of the variables. How many extra of each do I have, and where are they? I have two extra a's on top. I have one extra b underneath. And I have the same number of c's top and bottom, so they'll cancel off entirely. This gives me: