Recall that negative exponents indicates that we need to move the base to the other side of the fraction line. For example:

(The "1's" in the simplifications above are for clarity's sake, in case it's been a while since you last worked with negative powers. One doesn't usually include them in one's work.)

In the context of simplifying with exponents, negative exponents can create extra steps in the simplification process. For instance: 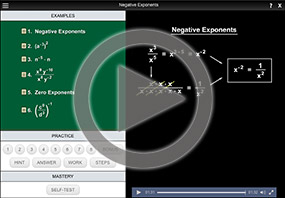 The negative exponents tell me to move the bases, so:

Then I cancel as usual, and get:

When working with exponents, you're dealing with multiplication. Since order doesn't matter for multiplication, you will often find that you and a friend (or you and the teacher) have worked out the same problem with completely different steps, but have gotten the same answer in the end.

This is to be expected. As long as you do each step correctly, you should get the correct answers. Don't worry if your solution doesn't look anything like your friend's; as long as you both got the right answer, you probably both did it "the right way".

Again, I can work either of two ways: multiply first and then handle the negative exponents, or else handle the exponents and then multiply the resulting fractions. I'll show both ways.

Neither solution method above is "better" or "worse" than the other. The way you work the problem will be a matter of taste or happenstance, so just do whatever works better for you.

The negative exponent is only on the x, not on the 2, so I only move the variable:

I have to move the variable; I should not move the 6.

I'll move the one variable with a negative exponent, cancel off the y's, and simplify: