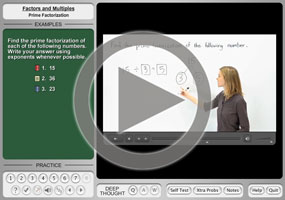 An easy way of keeping track of the factorization is to do upside-down division. It looks like this:

(The above graphic is animated on the "live" page.)

I'll do the upside-down division:

(The above graphic is animated on the "live" page.)

Some texts prefer that answers such as this be written using exponential notation, in which case the final answer would be written as 2×3×52×7.

You can do the repeated division "right-side up", too, if you prefer. The process works the same way, but the division is reversed in orientation. The above problem would be worked out like this:

I'll do the repeated division:

If the number is even, then it's divisible by 2.

If you run out of small primes and you're not done factoring, then keep trying bigger and bigger primes (11, 13, 17, 19, 23, etc) until you find something that works – or until you reach primes whose squares are bigger than what you're dividing into. Why? If your prime doesn't divide in, then the only potential divisors are bigger primes. Since the square of your prime is bigger than the number, then a bigger prime must have as its remainder a smaller number than your prime. The only smaller number left, since all the smaller primes have been eliminated, is 1. So the number left must be prime, and you're done.

You can use the Mathway widget below to practice finding the prime factorization. Try the entered exercise, or type in your own exercise. Then click the button to compare your answer to Mathway's.