For the easy case of factoring quadratic polynomials, we will need to find two numbers that will multiply to be equal the constant term c, and will also add up to equal b, the coefficient on the linear x-term in the middle. Why? 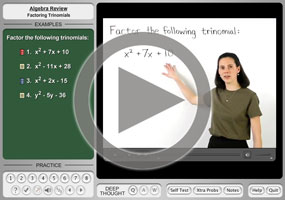 Looking at two generic binomials (using the variable x and the generic numbers p and q), we can multiply the binomials like this:

In the above, (p + q) = b and pq = c from "x2 + bx + c". This multiplication and simplification explains why, to factor a quadratic, we'll need to start by finding the two numbers (being the p and the q above) that add up to equal b, where those numbers also multiply to equal c. It's required by the logic of factoring (and factoring the quadratic is the "undo" of the original binomial multiplication).

(By the way, I call this topic "factoring quadratics", where your textbook may refer to this topic as "factoring trinomials". But a "trinomial" is any three-term polynomial, which may not be a quadratic (that is, a degree-two) polynomial. And not all quadratics have three terms. So the book's section or chapter title is, at best, a bit off-target. Don't worry about the difference, though; the book's title means the same thing as what this lesson explains.)

Here's what the "simple" quadratic-factorization process looks like, in practice:

This quadratic has a leading coefficien of 1, so this is the simple case of factoring. To get started, I need to find factors of c = +6 that add up to b = +5. I have two options, because 6 factors as the product of 2 and 3, or as the product of 1 and 6.

I'll check the sums of the pairs of potential factors, to see which works:

Since I need my factors to sum to plus-five, then I'll be using the factors +2 and +3.

At the ends of each parenthetical go the numbers that multiply to +6 and add to +5. This means that I can finish my factoring by plugging those numbers into my parentheticals, in either order:

Why "in either order"? Because the front ends of the two parentheticals were the same, so I'd have ended up with the same factorization, either way. Remember: order doesn't matter in multiplication.

This is how all of the "easy" quadratics will work: we find factors of the constant term that add up to the middle term, and then we use these factors to fill in our parentheses.

By the way, we can always check our work by multiplying our factors back together, and check that we have gotten back to the original answer. To check the above factorization, the multiplication goes like this:

Your text or teacher may refer to factoring "by grouping", which is covered in the lesson on simple factoring. In the "easy" case of factoring, using the "grouping" method just gives you some extra work. For instance, in the above problem, in addition to finding the factors of +6 that add to +5, you would have had to do these additional steps:

You would get the same answer as I did, but (I think) it's easier to just go straight to filling in the parentheses.

The leading term is just 1, so this is the simple case of factoring. The constant term is 6, which can be written as the product of 2 and 3 or of 1 and 6, just as in the previous exercise. But the coefficient on the middle term is different this time. Instead of a +5, I've got a +7.

The sign on the constant term is the same as before (namely, a "plus"), so I'll still need to "plus" factors. But the sum (that is, the middle-term's coefficient) is different; it's now a 7. Whereas 2 + 3 = 5 worked for the previous quadratic, +2 and +3 are not the numbers I need in this case. On the other hand, 1 + 6 = +7, so I'll use +1 and +6 for my factorization. And I'll also go straight from having drawn this conclusion to writing down my final answer:

Again, remember that the order doesn't matter in multiplication, so the above answer could equally-correctly be written as "(x + 6)​(x + 1)".

The constant term (created by multiplication) is +6, so my factors will be either both "plus" or else both "minus". But the middle coefficient this time is "minus". Since I'm adding to a "minus", (namely, to –5), then both factors must be "minus".

Note that we can use clues from the signs to determine which pairs of factors to use, as I demonstrated in the previous exercises. The rules, formally, look like this:

The leading coeficient is 1, so this is a simple-factoring quadratic. I am multiplying to a "plus" six, so the factors will be either both "plus" or else both "minus". Looking at the middle term, I see that I am adding to a "minus" seven, so my factors will both be "minus".

Since I am multiplying to a "minus" six, I need factors that have opposite signs; that is, one factor will be "plus" and the other will be "minus". The coefficient on the middle term is a "plus" 1, so I know that the larger of the two factors (larger, that is, in terms of its absolute value) will get the "plus" sign. Since these opposite-signed numbers will be added together to get +1, then I need the two factors to be one unit apart.

Because I need to get a "plus" answer for the sum of the two factors, I'll need the larger of my two numbers to get the "plus" sign; namely, the 3 will be getting the "plus" sign (so the 2 gets the "minus" sign). Then my factorization is:

All the other considerations remain the same. I still want factors of 6 that are one unit apart, so I'll still be using 2 and 3. But this time, the sign on the 3 will be a "minus":

In this quadratic, the constant term is "minus", so I still want factors of opposite signs.

There is one special case, by the way, for factoring quadratics. Back when you were factoring plain old numbers, there were some numbers that didn't factor, such as 5 or 13. Recall that these unfactorable numbers are called "prime" numbers. You could always multiply two whole numbers to get another whole number, but some whole numbers could not be divided to get two (non-trivial) whole numbers.

The leading coefficient is 1, so this is a case of simple factoring. Since the constant term is "minus", I'll be needing a "plus" factor and a "minus" such that, when I multiply them together, I get –6, but when I add them, I get +7. In other words, I'll need two factors that are seven units apart, with the larger factor getting the "plus" sign.

One of the factors has to be "minus" in order to multiply to get a "minus" six! Trying the first factor pair of 1 and 6, the sum would be one of the following:

Okay; neither way worked. So maybe I should be using the other factor pair...? Checking the addition with those numbers, I get:

One might think, "Well, maybe I should should do the signs differently." But the only way to get factors of six to add up to seven is to give those factors the same sign. But if I do that, then the factors won't multiply to a "minus" six.

In other words, there is no pair of factors of –6 that will add to +7. And if something isn't factorable, then it's prime. So x2 + 7x – 6 is a prime quadratic polynomial. In technical terms, it is "unfactorable over the integers", so-called because I couldn't find a pair of integers that would work. Then my answer is: