"The weird case" of quadratic factoring is where it doesn't seem like we're factoring a quadratic, but we kind-of are. We need to be clever with these, but they reduce to little more than pattern-recognition, once you catch on to how to do them. The expressions are said to be "quadratic in form", and we can apply the usual factorization methods to them.

At first glance, this does not appear to be a quadratic — and, in technical terms, it isn't. But this expression is quadratic in form, meaning that it can be restated as a quadratic, it follows the same patterns, and it can be factored by using the same techniques. 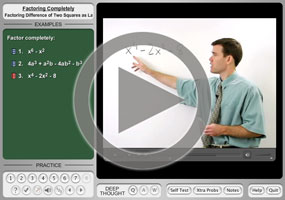 This polynomial has three terms (so it's a "trinomial"). Taking a closer look at those exponents, I see that the power on the leading term is 4, and the power on the middle term is 2, which is half of 4. In a "regular" quadratic, I would have the powers 2 and 1, where 1 is half of 2. In either case, the third term is just a number. So this polynomial follows the quadratic pattern; it is a quadratic "in x2", rather than "in x". In fact, I can rewrite the expression as:

My leading coefficient is just (the "understood") 1, so this is a case of simple quadratic factoring. I'll draw my parentheses as usual, but I'll put an x2 at the beginning of each factor:

Because this didn't start out as a regular quadratic, but instead as a polynomial in quadratic form, I still need to check to see if there is any further factoring possible. In this case, I still have a difference of squares, x2 – 4, that I can factor. This gives me a final answer of:

Some books will encourage you to switch variables. Using the above example, they'd have you plugging, say, a "y" in the original expression, in place of the "x2", so you'd convert the original polynomial to:

After this substitution, the result is clearly a quadratic, which easily factors as:

Then you'd be expected to back-substitute the "x2" for the "y" to get:

Many ("most"?) students find this "substitution and back-substitution" process very confusing. I'm glad to be able to tell you that it is not at all necessary. If you're one that finds it helpful, more power to you. Use whatever works better for you.

What follows are some fairly typical examples of weird quadratics, being non-quadratic polynomials which are of quadratic form. Note that there are always three terms in a quadratic-form expression, and the power (that is, the exponent) on the middle term is always half of the power on the leading term.

I know that, because I didn't start with an actual quadratic, I might not actually be done with this factorization, so I look at the two factors I've got. I see that the second of these factors is a sum of cubes, which is something that I can factor further:

Putting this all together, my complete answer is:

In these two examples, after I'd factored the quadratic-form expression, I still had to do some more factoring. This will not always be the case, but will often be the case on tests, when the instructor will be checking to see if you're on top of your game. So keep in mind that, just because you've completed one factoring step, this doesn't mean that you've completed the exercise.

This expression isn't even a polynomial, since polynomials are required to have whole-number exponents. However, this expression does have three terms, and the degree on the middle term is half of the degree on the leading term; and the third term is just a number. So this is in quadratic form; it's "a quadratic in x1/3". And, because the leading coefficient is just 1, this is actually a simple case of factoring.

There's nothing more that I can do with this, so I'm done. My answer is:

Because the one-half power is the same as the square root, my answer, "in radical form", is:

You may find yourself presented with an expression to factor, where it's stated like this:

If so, then convert the square root to a one-half power, and factor as usual. Then convert back to radical form, because they generally (unless specified otherwise) expect and require the answer to be in the same format as was the original question.

This has only two terms, and nothing comes out of both. So they've thrown me a curveball; this is actually just a difference of squares. I will factor in the usual way:

Checking, I see that neither of these factors is a difference of squares, nor a sum or difference of cubes, so there's nothing more I can do. My answer is:

Well, actually, because I'm lazy and this particular expression has such big lumpy terms, I'll do the substitution thing. But I won't bother with a variable; I'll just use a shape.

I'm not done yet, because I've got a squared binomial in there that I can multiply out, and then simplify inside each of the two resulting parentheticals:

Now I need to check to see if either of these simple-case quadratics factors further.

My final answer then is:

I can check my answer this last exercise by multiplying the two polynomial factors in my answer, multiplying everything out in the original expression, and verifying (by looking at them) that they both simplify to the same fourth-degree polynomial:

In fact, you can use this method to check any factorization answer. If you multiply everything back together, and you get what you'd started with, you then know that your factorization was correct. This can be handy, if you've got some time left over after you've finished answering everything on the test.

However, if I'd completely multiplied out the original expression, I may not have been able to figure out the factorization. Even though the original polynomial was lumpen, it paid off to work with it as it stood, rather than trying to simplify too early.

You can use the Mathway widget below to practice factoring expression that are quadratic in form. Try the entered exercise, or type in your own exercise. Then click the button to compare your answer to Mathway's.