The simplest multiplication involving polynomials is where we're taking a number through a set of parentheses. 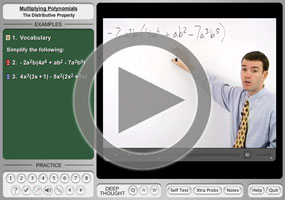 All I have to do here is multiply the –5 by the 2, while carrying the x2 along for the ride:

I have a number (being the 2) that I need to take through (or, using the technical terms, "distribute over") the parenthetical expression (being the 3x + 1). I'll show every step:

At this point, I'm left with two un-like terms, so I cannot combine or simplify any further. My answer is:

You may already have seen this sort of computation when you learned about simplifying with parentheses.

Moving up in complexity, we can multiply two single-term polynomials (called "monomials").

I've already done this type of multiplication when I was first learning about exponents, negative numbers, and variables. I'll apply the rules that I already know:

I can't simplify any further, so I'm done. My answer is:

I'll need to be careful with my "minus" signs.

The next step up in complexity is multiplying a monomial (rather than a plain number) through a multi-term polynomial.

To do this multiplication, I have to distribute the –3x through the parentheses:

The next step up in complexity is the multiplication of one two-term polynomial by another two-term polynomial (that is, one binomial by another binomial). This is the simplest of the "multi-term times multi-term" cases. There are actually three ways to do this. Since this is one of the most common polynomial multiplications that you likely will be doing, I'll spend a fair amount of time on this.

This horizontal multiplication, while mathematically valid, is probably the most difficult and error-prone way to do this multiplication. The "vertical" method is much simpler. Think back to when you were first learning about multiplication. When you did small numbers, it was simplest to work horizontally:

For instance, you would probably not want to try to multiply 121 by 32 horizontally, but it's easy when you do it vertically:

You can multiply polynomials in this same manner, so here's the same exercise as above, but done "vertically" this time:

I need to be sure to do my work very neatly. First, I'll set up the multiplication:

Multiply the bottom +2 by the top x, and carry down the +2x:

Multiply the bottom x by the top +3, and carry down the +3x:

Multiply the bottom x by the top x, and carry down the x2:

Draw a horizontal line below the two new rows:

Carry the x2 down to the bottom:

Carry the +6 down to the bottom:

I get the same answer as before, when I multiplied horizontally: