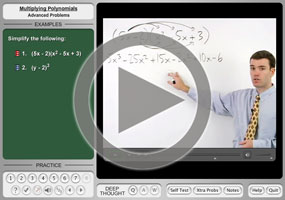 Here's what the multiplication looks like when it's done horizontally:

That was painful! Now I'll do it vertically:

That was a lot easier! But, by either method, the answer is the same:

I'm just going to do this one vertically; horizontally is too much trouble.

I'll take my time, and do my work neatly:

First off, I notice that terms of these polynomials have some power (that is, degree) "gaps".

(This is similar to using zeroes as "place holders" in regular numbers. You might have a thousands digit of 3, a hundreds digit of 2, and a units digit of 5, so you'd put a 0 in for the tens digits, creating the number 3,205.)

See how I needed the gaps? See how it helped that I had everything lined up according to the term's degree? If I hadn't left gaps when writing out my original factors, my terms could easily have become misaligned in the rows below. By taking the time to write things out explicitly neatly, I saved myself from many needless difficulties.

I did have one professor who could just look at huge polynomial products, and somehow keep all the terms straight while he did the multiplications and additions in his head. He'd write down the terms one-by-one, starting from the highest degree to the lowest, going straight from the original product to the final answer. He seriously freaked us all out!

While you may aspire to such proficiency, don't reject the tool of vertical multiplication, at least when you're getting started. Don't try to freak out your classmates until you're really good at using the regular methods.

You can use the Mathway widget below to practice multiplying general polynomials. Try the entered exercise, or type in your own exercise. Then click the button and select "Multiply" to compare your answer to Mathway's.