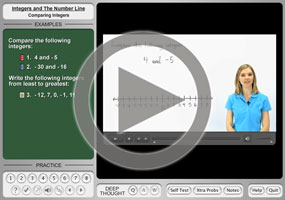 Europeans were not alone in being ignorant of, or dismissive of, negative numbers. Egyptians, nearly two thousand years ago, regarded negative numbers as being ridiculous. Europeans, like the Egyptians, used a mathematics based on geometrical concepts such as area, which is always positive. This retarded their mathematical progress, because they were thinking of numbers in an unhelpful way. However, when European scholars started translating Arabic texts obtained from North Africa, they were finally exposed to new ways of thinking, and started catching up.

The point of this history lesson is to explain that many generations of very intelligent people proved unable to accept, let alone understand, negative numbers. So if you're having difficulty with the concept, you're in good company. But you, like those eighteenth-century Europeans, can finally "get it", too!

When you first learned your numbers, way back in elementary school, you started with the counting numbers: 1, 2, 3, 4, 5, 6, and so on. Your number line looked something like this:

Later on, you learned about zero, fractions, decimals, square roots, and other types of numbers, so your number line started looking something like this:

Addition, multiplication, and division always made sense – as long as you didn't try to divide by zero – but sometimes subtraction didn't work. If you had "9 – 5", you got 4:

...but what if you had "5 – 9"? You just couldn't do this subtraction, because there wasn't enough "space" on the number line to go back nine units:

Note the arrowhead on the far right end of the number line above. That arrow tells you the direction in which the numbers are getting bigger. In particular, that arrow also tells you that the negatives are getting smaller as they move off to the left. That is, –5 is smaller than –4.

How do we use this expanded number line? Well, for starters, we can now do the subtraction "5 – 9". From zero, we go five units to the right, and then we subtract nine units to the left:

Negative numbers might seem a bit weird at first, but that's okay; negatives take some getting used to. Let's look at a few inequalities, to practice your understanding. Refer to the number line above, as necessary.

Look at the number line above. Since 6 is to the right of 3, then 6 is larger, so the correct inequality is:

Look at (or think of) the number line again. Every positive number is to the right of every negative number, so the correct inequality is:

Think of the number line again. Since –6 is to the left of –3, then –3, being further to the right, is actually the larger number. So the correct inequality is:

Zero is less than any positive number, so:

Zero is greater than any negative number, so: