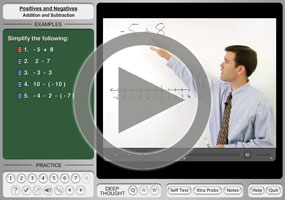 Now look back at that subtraction you couldn't do: 5 − 9. Because you now have negative numbers off to the left of zero, you also now have the "space" to complete this subtraction. View the subtraction as adding a negative 9; that is, draw an arrow from zero to five, and then a "negative" arrow nine units long:

Of course, this method of counting off your answer on a number line won't work so well if you're dealing with larger numbers. For instance, think about doing "465 − 739". You certainly don't want to use a number line for this. However, since 739 is larger than 465, you know that the answer to "465 − 739" has to be negative, because "minus 739" will take you somewhere to the left of zero. But how do you figure out which negative number is the answer?

Probably the simplest thing to do is convert everything to addition, group the positives together and the negatives together, combine, and simplify. It looks like this:

This is actually a fairly important concept, and, if you're asking, I'm assuming that your teacher's explanation didn't make much sense to you. So I won't give you a "proper" mathematical explanation of this "the minus of a minus is a plus" rule. Instead, here's a mental picture that I ran across years ago in an algebra newsgroup:

Imagine that you're cooking some kind of stew in a big pot, but you're not cooking on a stove. Instead, you control the temperature of the stew with magic cubes. These cubes come in two types: hot cubes and cold cubes.

Now suppose you have some double cubes and some triple cubes. If you add three double-hot cubes (add three-times-positive-two), the temperature goes up by six. And if you remove two triple-cold cubes (subtract two-times-negative-three), you get the same result. That is, −2(−3) = + 6.

Here's another analogy that I've seen. Letting "good" be "positive" and "bad" be "negative", you could say:

To give a specific example:

the family of four in the minivan gets home, safe and sound: a good thing

the drunk driver in the stolen car veering all over the road doesn't get caught and stopped: a bad thing

the family of four is killed by the drunk driver, while the drunk flees the scene without a scratch: a bad thing

the drunk driver is caught and locked up before he hurts anybody: a good thing

The analogies above aren't technical explanations or proofs, but I hope they make the "minus of a minus is a plus" and "minus times minus is plus" rules seem a bit more reasonable.

For whatever reason, it seems helpful to use the terms "plus" and "minus" instead, of "add, "subtract", "positive", and "negative". So, for instance, instead of saying "subtracting a negative", you'd say "minus-ing a minus". I have no idea why this is so helpful, but I do know that this verbal technique helped negatives "click" with me, too.

Technically, I can move the numbers around the way I did between the two starred steps above only after I have converted everything to addition. I cannot reverse a subtraction, I can only reverse an addition; only addition is commutative. In practical terms, this means that I can move the numbers around only if I also move their signs with them. If I move only the numbers and not their signs, I will have changed the values and will end up with the wrong answer. Continuing...