What is a variable?

A variable is a box, and it exists to contain a value. Sometimes the value is already inside the box, and you have to figure out what that value is. Other times, the box is empty, and you get to pick the value to put inside.

When did folks start using variables?

Some Greeks used variables in their work back in the third century. Then there is no record of their use for about a millenium, with Europeans finally resurrecting their use in the early 1200's. But they didn't really take off until the 1500's. (More info here.)

(You may want to save a link to the home page of the site at the link above. If you ever need background info on math topics, this site is "the" reference to use.) 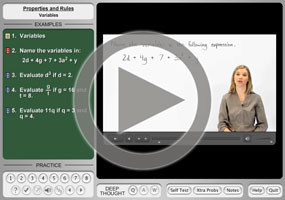 Remember when you were in elementary school, and you were learning your addition? The teacher would hand you worksheets that said things like:

Variables are the same thing. Now we say:

Why do we use variables?

We switched from boxes to letters because letters are better. Boxes come in only a few meaningless shapes; letters come in many varieties, and they can stand for something. For instance, the formula from geometry for finding a circle's circumference is:

The two formulae say exactly the same thing, but using "C" for "circumference" and "r" for "radius" is more useful than using "square" and "triangle, respectively. Boxes are fine, but letters are better.

In the above discussion, I illustrated both uses of variables:

What are independent / dependent variables?

In the equation "x + 2 = 5" in the first example above, x can only have a value of 3. The statement (the equation) is not true for any other value. That is to say, the value of x is "fixed"; we just have to figure out what that fixed value is. In this context (that is, when the variable "holds" a fixed value that you can find by solving), the variable may also be called "the unknown".

On the other hand, in the equation "C = 2πr" in the second example above, the radius r can be any non-negative number we choose — we get to pick! — and then we get to figure out what the circumference C is. We got to put the value in ourselves.

Note: While the value of the radius r in "C = 2πr" is independent, the resulting value of the circumference C is dependent upon whatever value we picked for r. If we picked instead independently picked a value for C, then we'd have to solve for the corresponding value of r, making r, in that case, the dependent variable.

In this context (that is, where you get to plug a value into one letter, and then can find the value for another letter), the variable whose value you pick (in this case, the r) is called the "independent" variable, because you, independently of others, got to pick the value; and the variable for which you can then find the value (in this case, the C) is called the "dependent" variable, because its value was entirely dependent upon what you picked for the value of r.

Now that we have variables, what do we do with them? Go back in your mind again to elementary school: Your teacher would have you add "2 apples plus 6 apples is 8 apples". The same rules apply to variables:

"A box and another box is two boxes"

"Two dollars, less the ten that you owe to your friend, means that you're eight dollars in the red"

But note: "2 apples plus 6 oranges" is just 2 apples and 6 oranges; they might make a nice fruit salad, but they're not 8 of anything. In the same way, "2x + 6y" is just 2x + 6y; you can't combine the two variables into one. The variable portions of the things being added (the "terms") aren't the same — in mathematical parlance, the terms are "unlike" — so they cannot be "combined".

By the way, take note of the technique I just used: I used plain old numbers, with which I was well familiar before I ever took algebra, in order to example-fy what is going on in the world of algebra. You can do the same thing in your own studies. If you're not sure what to do with the variables, try using regular numbers, where you know what to do. Then, whatever you did with the numbers, try doing the same thing with the variables.

When evaluating variable expression, it is important to pay attention to the fact that the variable is a "box" into which you're plugging a value. Any multipliers, powers, or other things are happening outside of that box. For instance:

Sometimes people will write the following as their evaluation expression:

But this moves the squaring inside the box, and takes the "minus" outside of the box. This is backwards. Instead, the evaluation expression should be:

There are often difficulties when the "minus" is outside of the box. For instance:

There tend to be two errors that are the result of the above. Either people will do this:

However, the correct evaluation expresson is the following: