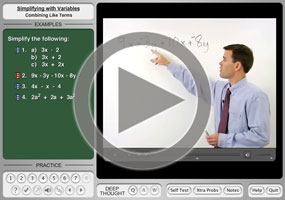 Terms can be combined only if they have the exact same variable portion. And, by "exact same", I mean "the same variable(s), raised to the same power(s)". Here is a rundown of what's what:

...because the first term contains a variable and the second term does not.

...because the variables are the same, and so are their powers.

...because the second term has an additional variable, so the variable portions don't match.

Once you have determined that two terms are indeed "like" terms and can indeed therefore be combined, you can then deal with the terms in a manner similar to what you did in grammar school. When you were first learning to add, you would do "five apples and six apples is eleven apples". You have since learned that, as they say, "you can't add apples and oranges". That is, "five apples and six oranges" is just a big pile of fruit; it isn't something like "eleven applanges".

Looking at these two terms, I see that each contains the variable x, and the variable has the same (understood) power of 1 in each term. So these are like terms, and I can combine them.

Back in grade-school arithmetic, "three apples plus four apples" got combined into "seven apples" by adding the three and the four to get seven, and bringing the "apples" along for the ride. In the same way, I will combine these two like terms by adding the numerical portion of each term, while carrying the x along for the ride:

I showed every step above in order to highlight how the terms are being combined; (it isn't normally necessary to be this complete). I'm adding the 3 and the 4, and carrying the x along for the ride. So my answer is:

I have found that it is often best to group the like terms together first, and then do my simplifying:

I don't need to include the (understood) 1 in my hand-in answer, and I can lose the parentheses on the coefficient of the linear x term, so my final answer is:

In the second line above, many students find it helpful to write in the understood coefficient of 1 in front of any variable expressions having no written coefficient, as is shown in red below:

It is not required that the understood 1 be written in when simplifying expressions like this, but many students find this technique to be very helpful, at least when they're starting out. You should use whatever method helps you to consistently complete the simplification correctly.

I will start by grouping the terms according to their degree.

Warning: When moving the terms around, remember that the terms' signs move with them. Don't mess yourself up by leaving orphaned "plus" and "minus" signs behind.

If it helps you keep things straight, rewrite the expression like this:

By turning the subtractions into additions of negatives, it is clear where the "minus" signs belong, and it's easier to move them correctly:

The first thing I need to do is take the "minus" through the parentheses:

Okay; these terms are not only not in descending order, they're almost completely backwards! I'll put them the right way 'round, and then simplify by combining the two constants, which are the only like terms:

I'm going to stress here again the fact that very many students, at least initially, have trouble with the "minus" signs in front of parentheticals. If it helps you to keep track of what's going on, try putting the "understood" 1 in front of the parentheses (highlighted in red below), and then multiplying that constant through onto the terms within the parenthetical, as shown below:

While the first format (without the understood 1's being written in) is the more "standard" format, either format is mathematically valid. You should use the format that works most successfully for you.

Don't be shy about inserting the understood 1 when you're starting out; don't feel bound to continue using it once you get to feeling confident without it. You do you.

This is just an order of operations problem with a variable in it. If I work carefully from the inside out, paying careful attention to my "minus" signs (that is to say, being careful to carry "minus" signs with the terms to which they're attached), then I should be fine:

Just so you know, this is the kind of problem that us math teachers love to put on tests (yes, some of us are kinda sick puppies), so you should expect to need to be able to deal with nested grouping symbols like this.

As always, I'll simplify from the inside out:

I'll start at the innermost grouping, and simplify my way out to the answer.

The simplification above involved two different variables. It is customary (though not technically required) to list the terms so that their variables are in alphabetical order. That's why I listed the 3x before the 9y. And, regardless of what might be going on with the variable terms, the constant term always goes at the very end.

(If you think you need more practice with this last type of problem (with all the brackets and the negatives and the parentheses, then you might want to review the "Simplifying with Parentheses" lesson.)

When we're talking apples and oranges, it's usually pretty easy to see what should be combined with what else, and in what manner. But once we start dealing with variables, things can get confusing. Don't get careless and confuse multiplication and addition. This may sound like a silly thing to me to say, but it may be the most commonly-made student mistake when combining like terms (aside from messing up the order of operations).

...so it is simplified using rules for combining exponents.

...so it is simplified using rules for combining coefficients.

Let me be very clear:

x2 does not equal 2x

Take your time, and make sure you are keeping straight in your head how multiplication works, versus how addition works. In fact, "combining like terms" is a topic for which it would be difficult to do "too much" practice. Do as many practice problems as you can. You want proper simplification to become so familiar that the process of it almost flows, so you're barely even having to think about what you're doing. This will stand you in good stead for the rest of your mathematical (and science-based) career! 👍

You can use the Mathway widget below to practice combining "like" terms. Try the entered exercise, or type in your own exercise. Then click the button and select "Combine" or "Simplify" to compare your answer to Mathway's.