The Order of Operations: PEMDAS

If you are asked to simplify something like "4 + 2×3", the question that naturally arises is "Which way do I do this? Because there are two options!" I could add first:

...or I could multiply first:

Which answer is the right one? 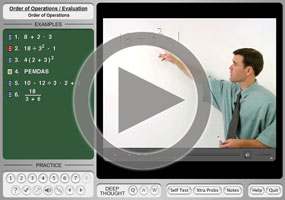 The Order of Operations

It seems as though the answer depends on which way you look at the problem. But we can't have this kind of flexibility in mathematics; math won't work if you can't be sure of the answer, or if the exact same expression can be calculated so that you can arrive at two or more different answers.

To eliminate this confusion, we have some rules of precedence, established at least as far back as the 1500s, called the "order of operations". The "operations" are addition, subtraction, multiplication, division, exponentiation, and grouping; the "order" of these operations states which operations take precedence (are taken care of) before which other operations.

If you're not sure of this, test it in your calculator, which has been programmed with the Order-of-Operations hierarchy. For instance, typesetting the above expression into a graphing calculator, you will get:

Using the above hierarchy, we see that, in the "4 + 2×3" question at the beginning of this article, Choice 2 was the correct answer, because we have to do the multiplication before we do the addition.

(Note: Speakers of British English often instead use the acronym "BODMAS", rather than "PEMDAS". BODMAS stands for "Brackets, Orders, Division and Multiplication, and Addition and Subtraction". Since "brackets" are the same as parentheses and "orders" are the same as exponents, the two acronyms mean the same thing. Also, you can see that the "M" and the "D" are reversed in the British-English version; this confirms that multiplication and division are at the same "rank" or "level". Canadian English-speakers split the difference, using BEDMAS.)

The order of operations was settled upon in order to prevent miscommunication, but PEMDAS can generate its own confusion; some students sometimes tend to apply the hierarchy as though all the operations in a problem are on the same "level" (simply going from left to right), but often those operations are not "equal". Many times it helps to work problems from the inside out, rather than left-to-right, because often some parts of the problem are "deeper down" than other parts. The best way to explain this is to do some examples:

I need to simplify the term with the exponent before trying to add in the 4:

I have to simplify inside the parentheses before I can take the exponent through. Only then can I do the addition of the 4.

I shouldn't try to do these nested parentheses from left to right; that method is simply too error-prone. Instead, I'll try to work from the inside out. First I'll simplify inside the curvy parentheses, then simplify inside the square brackets, and only then take care of the squaring. After that is done, then I can finally add in the 4:

There is no particular significance in the use of square brackets (the "[" and "]" above) instead of parentheses. Brackets and curly-braces (the "{" and "}" characters) are used when there are nested parentheses, as an aid to keeping track of which parentheses go with which. The different grouping characters are used for convenience only. This is similar to what happens in an Excel spreadsheet when you enter a formula using parentheses: each set of parentheses is color-coded, so you can tell the pairs:

I will simplify inside the parentheses first:

So my simplified answer is

The next page has more worked examples examples....