The hardest thing about doing word problems is using the part where you need to take the English words and translate them into mathematics. Usually, once you get the math equation, you're fine; the actual math involved is often fairly simple. But figuring out the actual equation can seem nearly impossible. What follows is a list of hints and helps. Be advised, however: To really learn "how to do" word problems, you will need to practice, practice, practice.

How do I convert word problems into math?

The steps for setting up word problems are: 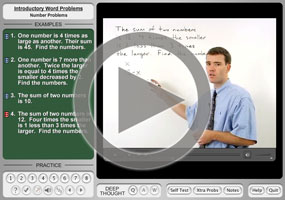 Step 1 in effectively translating and solving word problems is to read the problem entirely. Don't start trying to solve anything when you've only read half a sentence. Try first to get a feel for the whole problem; try first to see what information you have, and then figure out what you still need.

Step 2 is to work in an organized manner. Figure out what you need but don't have. Name things. Pick variables to stand for the unknows, clearly labelling these variables with what they stand for. Draw and label pictures neatly. Explain your reasoning as you go along. And make sure you know just exactly what the problem is actually asking for. You need to do this for two reasons:

Regarding point (a) above:

It can be really frustrating (and embarassing) to spend fifteen minutes solving a word problem on a test, only to realize at the end that you no longer have any idea what "x" stands for, so you have to do the whole problem over again. I did this on a calculus test — thank heavens it was a short test! — and, trust me, you don't want to do this to yourself. Taking fifteen seconds to label things is a better use of your time than spending fifteen minutes reworking the entire exercise!

Step 3 is to look for "key" words. Certain words indicate certain mathematica operations. Some of those words are easy. If an exercise says that one person "added" her marbles to the pile belonging to somebody else, and asks for how many marbles are now in the pile, you know that you'll be adding two numbers.

What are common keywords for word problems?

The following is a listing of most of the more-common keywords for word problems:

increased by
more than
combined, together
total of
sum, plus
added to
comparatives ("greater than", etc)

decreased by
minus, less
difference between/of
less than, fewer than
left, left over, after
save (old-fashioned term)
comparatives ("smaller than", etc)

of
times, multiplied by
product of
increased/decreased by a factor of (this last type can involve both addition or subtraction and multiplication!)
twice, triple, etc
each ("they got three each", etc)

per, a
out of
ratio of, quotient of
percent (divide by 100)
equal pieces, split
average

is, are, was, were, will be
gives, yields
sold for, cost

Warning: The "less than" construction, in "Subtraction", is backwards in the English from what it is in the math. If you need, for instance, to translate "1.5 less than x", the temptation is to write "1.5 − x". Do not do this!

You can see how this is wrong by using this construction in a "real world" situation: Consider the statement, "He makes $1.50 an hour less than me." You do not figure his wage by subtracting your wage from $1.50. Instead, you subtract $1.50 from your wage. So remember: the "less than" construction is backwards.

(Technically, the "greater than" construction, in "Addition", is also backwards in the math from the English. But the order in addition doesn't matter, so it's okay to add backwards, because the result will be the same either way.)

Some times, you'll be expected to bring your "real world" knowledge to an exercise. For instance, suppose you're told that "Shelby worked eight hours MTThF and six hours WSat". You would be expected to understand that this meant that she worked eight hours for each of the four days Monday, Tuesday, Thursday, and Friday; and six hours for each of the two days Wednesday and Saturday. Suppose you're told that Shelby earns "time and a half" for any hours she works over forty for a given week. You would be expected to know that "time and a half" means 1.5 times her base rate of pay; if her base rate is twelve dollars an hour, then she'd get 1.5 × 12 = 18 dollars for every over-time hour.

Probably the greatest source of error, though, is the use of variables without definitions. When you pick a letter to stand for something, write down explicitly what that latter is meant to stand for. Does "S" stand for "Shelby" or for "hours Shelby worked"? If the former, what does this mean, in practical terms? (And, if you can't think of any meaningful definition, then maybe you need to slow down and think a little more about what's going on in the word problem.)

In all cases, don't be shy about using your "real world" knowledge. Sometimes you'll not feel sure of your translation of the English into a mathematical expression or equation. In these cases, try plugging in numbers. For instance, if you're not sure if you should be dividing or multiplying, try the process each way with regular numbers. For instance, suppose you're not sure if "half of (the unknown amount)" should be represented by multiplying by one-half, or by dividing by one-half. If you use numbers, you can be sure. Pick an easy number, like ten. Half of ten is five, so we're looking for the operation (that is, multiplication or division) that gives us an answer of 5. First, let's try division:

Well, that's clearly wrong. How about going the other way?

That's more like it! You know that half of ten is five, and now you can see which mathematical operations gets you the right value. So now you'd know that the expression you're wanting is definitely "(1/2)x".

You have experience and knowledge; don't be afraid to apply your skills to this new context!