What is a ratio?

A "ratio" is just a comparison between, or a relating of, two different things. Ratios are used to create proportions by setting two ratios equal to each other and solving for some unknown, and ratios can also be used to find per-unit rates such as how many mile a car can drive "per liter" or how many hours the average student at a given university spends studying "per week". 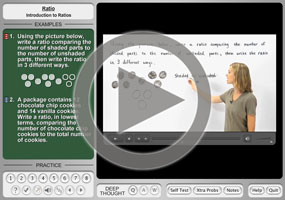 What is an example of finding a ratio?

As an example of a ratio, someone can look at a group of people, count noses, and refer to the "ratio of men to women" in the group. Suppose there are thirty-five people, fifteen of whom are men. Then the rest are women, so:

You should be able to recognize all three notations; you will probably be expected to know them, and how to convert between them, on the next test. For example:

They want "the ratio of ducks to geese", so the number for the ducks comes first (or, for the fractional form, on top). So my answer is:

This time, they want me to give them "the ratio of geese to ducks". I'll be using the exact same numbers but, in this case, the number of geese comes first (or, for the fractional form, on top). So my answer is:

Let's return to the 15 men and 20 women in our original group. I had expressed the ratio as a fraction, namely, . This fraction reduces to . This means that we can also express the ratio of men to women in the group as being 3 :  4, or "3 to 4".

This points out something important about ratios: the numbers used in the ratio might not be the absolute measured values. The ratio "15 to 20" refers to the absolute numbers of men and women, respectively, in the group of thirty-five people. The simplified or reduced ratio "3 to 4" tells us only that, for every three men, there are four women. The simplified ratio also tells us that, in any representative set of seven people (3 + 4 = 7) from this group, three will be men. In other words, the men comprise of the people in the group. These relationships and reasoning are what we use to solve many word problems:

So, of the class of 36 students, the class was not passed by:

The ratio from a representative group can also be used to provide percentage information.

I already know that the representative group contains 12 students, of which 7 passed the class. Converting this to a percentage (by dividing, and then moving the decimal point, as explained here), I get:

They want the answer rounded to one decimal place, so my answer is:

This is the number they're wanting. In the entire park, there are:

Generally, ratio problems will just be a matter of stating ratios or simplifying them. For instance:

This exercise wants me to write the ratio as a reduced fraction. So first I'll form the fraction, and then I'll do the cancelling that leads to "simplest form".

The dollar signs cancelled off, too, because they were the same, top and bottom, in the ratio's fractional form. So my answer is:

This reduced fraction is the ratio's expression in simplest fractional form. The units (being the "dollar" signs) cancelled on the fraction because the units (namely, the "$" symbols) were the same on both values.

The terms in this ratio have different units, so they won't cancel off; there will be units on my simplified ratio. My simplification looks like this:

This particular ratio of units, "(miles)/(gallon)", has its own simplified form; namely, "miles per gallon", which is abbreviated as "mpg". So, in standard English, my answer is:

In contrast to the answer to the previous exercise, this exercise's answer did need to have units on it, since the units on the two parts of the ratio (namely, the "miles" and the "gallons") were not the same, and thus did not cancel each other off. When a ratio ends up with units (or dimensions) on it, the ratio may also be referred to as a "rate". In the case of the exercise above, the rate was the distance covered per unit-volume of fuel.

Conversion factors are simplified ratios, so they might be covered around the same time that you're studying ratios and proportions. For instance:

I know that the length of an American football field, exclusive of the "end" zones, is 100 yards. I also know that 3 feet are equal to 1 yard. I can set up this equality as a ratio. Because they've given me a measurement in "yards", I'll want the unit of "yards" to cancel off in my multiplication. Because of this, I'll state my ratio (of yards to feet) with the "feet" on top:

Now I can multiply the length they've given me by my conversion factor (being the ratio above), and simplify:

This value is the number they're wanting, so my answer is:

For more on this topic, look at the "Cancelling / Converting Units" lesson.

Ratios are the comparison of one thing to another (miles to gallons, feet to yards, ducks to geese, et cetera). But their true usefulness comes in the setting up and solving of proportions.

You can use the Mathway widget below to practice converting ratios, expressed in "odds" notation, to fractional form. Try the entered exercise, or type in your own exercise. Then click the button and select "Convert to a Simplified Fraction" to compare your answer to Mathway's. (Or skip the widget, and continue on to the next page.)