The topic of proportions has some specific terminology that you may need to know. For instance, given the following proportion equation: 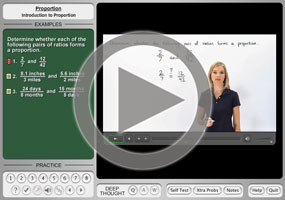 While these values are close, they are not equal, so I know the original fractions cannot be proportional to each other. So my answer is:

If I'd reversed the fractions, and used 176 and 24 as my means and 30 and 140 as my extremes, I would have gotten the same products (just in reverse order), and thus the same answer (namely, that the fractions are not proportional). So don't worry about which fraction is "first" or "second"; either way will work.

To confirm proportionality (or to disprove it), I'll need to set up the proportion, multiply the means, multiply the extremes, and compare the results. Or, which is the same thing (but without doing an equation that might not actually be true), I'll multiply one fraction's denominator by the other's numerator, and vice-versa:

Once again, they're close, but they're not equal. So:

I "cross-multiply" (meaning, in this context, multiplying one fraction's numerator by the other's denominator, and vice versa):

Finally, a pair that is proportional!

In the proportional equation created by these two equal fractions, the means of the proportion are both the same value, "2", while the extremes are 1 and 4. This tells us that the number 2 is the "mean proportional" between the numbers 1 and 4.

They've given me two numbers and a keyword, being "mean proportional". So I know that I need to set up a proportion, using the given values as the extremes, and then I have to find the means.

By definition of "mean proportional", I know that the means will be the same one value. I'll let "x" be that one value that I'm looking for. I'll set up my proportion equation, using my variable for the means, and the two values that they've given me as the extremes:

Now I'll cross-multiply and then solve for the value of x:

If I check the cross-products of each equation, I'll get equal results; in other words, the negative value is a valid result, too. So, actually, there are two mean proportionals to the given equation:

To find the means, I'll set up my equation, and solve:

Since they specified that they want the positive mean, my answer is:

You may have noticed that, in the above solutions, I always ended up with a squared value equal to a number, and then I took the square root of each side of the equation. This gives a shortcut method for solving for the mean proportional:

They specified that they want the value that is "between" the two given values, and those values are positive, so I know they're wanting the positive solution. Instead of setting up a proportion, cross-multiplying to create a quadratic equation, and then solving, I'll go straight to the square root:

And that final value is my answer:

(By the way, while highly unusual, you may see an exercise where the extremes of a proportion (that is, the given values in a "find the mean proportional" exercise) are both negative. When these values are multiplied, the "minus" signs will cancel off, and you can take the square root, as usual.

(However, it is impossible to have a proportion where the extremes have opposite signs. Why? Because the product of opposite-sign extremes would be negative, and you can't take the square root of a negative. If you're ever asked to find the mean proportional of two opposite-sign values, be aware that it's a trick question!)

Just because all the examples they gave me in the textbook had whole numbers, doesn't mean that a proportion cannot contain fractions; it can. I'll use the shortcut method for solving, by multiplying the two extremes, and then taking the (positive) square root:

So the mean proportional of the two fractions is another fraction:

It can be proved that the height h and the two pieces, x and y, of the base form a proportion:

This relationship can be turned into exercises, such as:

And then I take the square root:

Then, after multiplying this out, I find that the height of the triangle is: