This process will of course only work if the ground is perfectly flat but, under that assumption, the reasoning is valid. The sun is far enough away that the rays of light that reach one general area on the planet (say, a particular parking lot) may safely be regarded as being parallel. 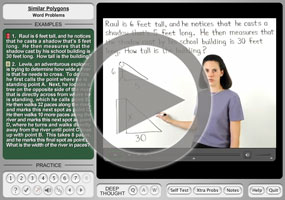 This obviously would not be the case for a nearby light-source, such as a helicoptor hovering overhead:

As you can see above, the light rays from the chopper's spotlight, with respect to the edge of the topmost part of the building and the top of the flagpole in the parking lot, are not even close to being parallel.

On the other hand, as you can see below, the sun's rays in the same general area will be close enough to being parallel as makes no difference:

To extract the intended and necessary information from the above picture, we draw an horizontal line for the ground, vertical lines for the heights of the building and the flagpole, and slanty lines indicating the sun's rays. (An animation in the exercise below illustrates this process.)

Because the slanty lines are assumed to be at the same angle from the horizontal, then these two triangles must be similar. Then we can use what you know about proportions and similar figures to solve the exercise.

Note that, because the height-lines and the ground are (assumed to be) perpendicular, the similar triangles are also right-angled triangles. This doesn't usually matter, but try to make the triangles that you draw look at least roughly right-angled.

Exercises involving the sun's rays commonly ask for the heights of buildings, very tall trees, or oversized flag poles; and you're expected to determine these heights based on known information from short trees, short poles, or something as simple as a measuring stick stood on end, perfectly vertically, on the pavement, or maybe your own shadow.

This exercise involves a tall building, a shorter flagpole (of known height), and the shadows cast by each of the building and the pole. I am expected to assume that the ground on which the building and the flagpole are situated is perfectly flat, at least in the areas on which their shadows are cast. And I'm expected to use the fact that the sun's rays are, in practical terms, parallel. In other words, I'm supposed to have this picture in mind:

The above image is derived from the animation, available on the "live" page.

This gives me two similar (and right) triangles. The above image explains how the triangles are derived; the below image shows the pertinent information that I've abstracted from the exercise, and is the information that I'll use to answer the question:

Because the triangles are similar, I can set up a proportion and solve for the height h:

I'll use the shortcut method:

Rounding to the nearest tenth, and adding on the correct units, I find that the building has a height of about:

This is a pretty straight-forward application of using the sun's rays to estimate height. I'll set up my proportion, and solve:

The pole is close to, but certainly no more than, fifteen feet in height. (This is a common residential maximum.) As long as the pole isn't sent flying, and only falls over in the next storm:

the house is safe

Each parking space is 2.75 meters wide, so the tree's shadow is 5.5 meters long. Will's shadow is 33 cm long, and his height is 178 cm. I'll represent the tree's height by h, and set up my proportion:

There is one last type of problem that you may not even think of as being a "ratios and proportions" kind of problem, but it arises often in "real life".

Sometimes, when you are mixing something (such as "mixed drinks", animal feeds, children's play-clay, potting soil, or color dyes), the measurements are given in terms of "parts", rather than in terms of so many cups or gallons or milliliters. For instance:

Since the sand is measured in cubic feet and the "recipe" is given in terms of "parts", I will let "one cubic foot" be "one part".

The ratio of cement to sand is 1 : 2, and I have four cubic feet of sand. I will define "c" to stand for the amount of cement that I need, and I will set up and solve my proportion.

I'd better not forget my units! The answer to my equation is "2", but the answer to this part of the exercise is that I need "two cubic feet of cement".

Keeping the context in mind, the answer to my equation is "g = 6", but the answer to this part of the exercise is that I need "six cubic feet of gravel". Then my complete answer is:

Rounding down to the nearest whole milliliter of the concentrate, I should pour in: