Solving proportions is simply a matter of stating the ratios as fractions, setting the two fractions equal to each other, cross-multiplying (as demonstrated below):

...and solving the resulting equation. The exercise set will probably start out by asking for the solutions to straightforward simple proportions, but they might use the "odds" notation, something like this: 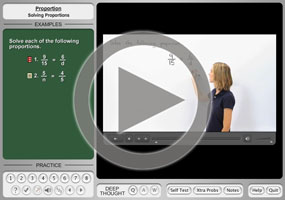 Okay; they've given me to ratios, in "odds" notation, and set them equal. This creates a proportion:

My first step will be to convert the colon-based odds-notation ratios to fractional form, so I get an equation with two fractions:

Then I'll solve the proportion. I could cross-multiply, and then divide back off, but I think I'll use the informal shortcut, like was illustrated earlier:

If I have to "show my work", I'll include my fractional equation with the arrows. My answer is:

Okay; this proportion has more variables than I've seen previously, and they're in expressions, rather than standing by themselves. So this is gonna be a cross-multiplying solution.

First, I convert the colon-based odds-notation ratios to fractional form:

Then I solve the proportion, starting by cross-multiplying:

I wasn't expecting a fraction, but it's a perfectly valid answer (which I can check, if I want, by plugging it back into the original equation).

Once you've solved a few proportions, you'll likely then move into word problems where you'll first have to invent the proportion, extracting it from the word problem, before solving it.

I will set up my ratios with "inches" on top (just because; there's no logic or particular reason for it), and will use the letter "c" to stand for the number of centimeters for which they've asked me. So here's my set-up:

Once I have my proportion, I can solve. In this case, I can use the shortcut method:

Looking back at how I defined the variable, I see that c stands for "the number of centimeters". The question asked for "how many centimeters?", not "what value?", so I need the unit "centimeters" on my answer.

Don't fall into the trap of thinking that you have to use x for everything. You can use whatever variable you find most helpful.

First, I'll need to convert the "two feet four inches" into a feet-only measurement. Since one foot contains twelve inches, then four inches is four-twelfths, or one-third, of a foot. So the length, converted to feet only, is:

I will set up my ratios with the length values on top (because I happened to pick that ordering, probably because the length info came before the weight info in the exercise). I'll use this set-up to make sure that I write out my proportion correctly, and then I'll solve for the required weight value. By the way, since I'm looking for a weight, I'm going to use w as my variable.

I can use the shortcut method for solving this proportion, so I'll multiply crossways in the one direction, and then hook back and divide going in the other direction:

Since this is a "real world" word problem, I should probably round or decimalize my exact fractional solution to get a practical "real world" sort of number. To be on the safe side, though, I'll give both the "exact" (fractional) form and also the rounded (more real-world) form:

The logical basis for answering this question is the unstated assumption that all properties in the same district are assessed at the same percentage rate.

If this question were being asked in the homework for the section on "percent of" word problems, then I would have the tax rate as a percentage from the info they gave me for the first property; and then I would have back-solved, using the rate I'd just found, for the value of the second property. However, since this question is being asked in the section on proportions, I'll solve using a proportion.

They've given me two categories of things: assessed values of properties, and the amounts of taxes paid. My ratios will then use these two categories. I will set up my ratios with the assessed valuation on top (because that's what I read first in the exercise), and I will use "v" to stand for the value that I need to find.

I'll use the shortcut method for solving, multiplying the 70,000 and the 1,400 in one direction, and then dividing by the 1,100 going in the other direction:

Since the solution is a dollars-and-cents value, I must round the final answer to two decimal places; the "exact" form (whether repeating decimal or fraction) wouldn't make sense in this context. So my answer is:

I'll label the length of the short piece as "s". Then the long piece, being what was left of the original piece after I cut off s meters, must have a length of 21 − s. Then my ratio, in fractional (rather than in odds) format, is:

Because there are two parts of this proportion that contain variables, I can't use the shortcut to solve. Instead, I'll cross-multiply, and proceed from there.

Now that I've found both required values, I can give my answer, complete with the correct units:

In the last exercise above, if I had not defined what I was using "s" to stand for, I could easily have overlooked the fact that "s = 6" was not the answer the exercise was wanting. Try always to clearly define and label your variables. Also, be sure to go back and re-check the word problem for what it actually wants. This exercise did not ask me to find "the value of a variable" or "the length of the shorter piece". By re-checking the original exercise, I was able to provide an appropriate response, being the lengths of each of the two pieces, including the correct units of meters.