To convert between units, you're usually given one measure and asked to convert to another measure. For instance, you'll be given some volume in "gallons" and be asked to convert the volume to "fluid ounces". They will have given you (or else you can easily find) the conversion units that are suitable to the task. And you'll be expected to multiply or divide by one or another of these unit equivalences in order to do the conversion.

Should I multiply or divide to convert between units?

To convert from one unit to another, here's the really simple rule: 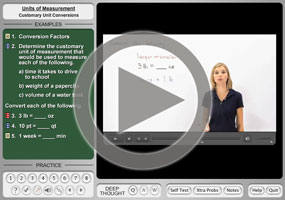 What are some examples of converting between units?

Quarts are smaller than gallons; every gallon has four quarts. Since I'm converting from a larger unit (gallons) to a smaller unit (quarts), my answer needs to be a bigger number. So I multiply:

Miles are bigger than yards; there are 1760 yards in every mile. Since I'm converting from a smaller unit (yards) to a bigger unit (miles), my answer needs to be a smaller number. So I divide:

Note: The above conversions were between two "Imperial" (or, really, "American") units. Converting between two metric units is so much easier!

The above are examples of one-step conversions between units of the same type; namely, Imperial units. To do that type of conversion, you use one conversion factor (that is, the equivalence between the two measures or units) to convert from the one unit to the other.

But sometimes conversions are more complicated, or you're not sure which unit is "bigger". This applies especially in the case of conversions between English and metric units. For instance, which is "bigger", decaliters or Imperial gallons? Or consider rates: which is "bigger", 80 miles an hour or 40 meters per second? It's hard to see how the term "bigger" would apply here.

How do you do complicated conversions, like between metric and Imperial?

For these sorts of conversion, we use as many conversion factors as we need, setting up a long multiplication so the units we don't want cancel out. Note: I'm not talking here about numbers "cancelling out", like when you're multiplying fractions. Instead, I'm talking about treating the units ("feet", "cubic centimeters", "seconds", etc) as though they were numbers, and cancelling them.

What are some examples of more-complicated unit conversions?

So, in some way or another, I need to convert between "miles" and "meters" and between "hours" and "seconds". Looking in the back of my textbook (which is frequently a handy resource, along with the endpages of many dictionaries), I find a table of common conversion factors, from which I pull out these as being probably helpful:

I could have chosen other conversion factors, if I'd felt like it. But these factors provide connections, one way or another, between "seconds" and "hours" and between "miles" and "meters", so they'll get the job done.

To compare these two rates of speed, I need them to be in the same units. Flipping a coin, I decide that I'll convert the "80 miles per hour" to "meters per second". I need to set things up so the units will cancel:

Why did I put "1 hour" on top and "60 mins" underneath? Because I started with "80 miles per hour", so "hours" started out underneath. I want "hours" to cancel off (in favor of "seconds", eventually), so the conversion factor for hours and minutes needed to have "hours" on top. That meant that "60 mins" had to be underneath.

And that dictated the orientation of the next factor: Since "60 mins" was underneath and since I'd need "minutes" to cancel at some point, then the "1 min" (from the conversion factor for minutes and seconds) had to be on top. This in turn meant that "60 secs" had to be underneath. And since I'm wanting a final answer of "per seconds", I want the seconds underneath, so this works out just right.

The last conversion factor is "100 centimeters to 1 meter"; since "centimeters" in the previous factor were on top, then I'll need "centimeters" on the bottom, leaving the "meters" on top. Since I'm wanting a final result that is in terms of "meters per second" (that is, meters divided by seconds), I want the meters on top, so this part worked out right, too.

Putting it all together, I get the following long string:

(If you're not sure of my multiplication set-up above, then go grab a sheet of scratch-paper and do the described steps yourself.)

Now I cancel off the units:

Since the units cancel, leaving me with the "meters per second" that I need (circled above), I know the numbers must be in the right places. To get my answer, all I have to do is grab a calculator and simplify the fraction multiplication:

This says that 80 miles per hour is equivalent to just under 36 meters per second. Forty is more than thirty-six, so:

40 meters per second is faster than 80 miles per hour.

This method of converting units can actually be quite useful: it got me through a chemistry class! I didn't have a clue what the instructor was talking about, but on the test questions he gave only the exact information needed, and if I set up everything so the units cancelled, I always got the right answer.

Now, I'm not advocating being ignorant of chemistry; I'm making a point: This unit-cancelling thing is a powerful technique. Cancelling units (also known as "unit analysis" or "dimensional analysis") is based on the principal that multiplying something by "1" doesn't change the value, that any value divided by the same value equals "1", and that (for the purposes of converting between units) a conversion factor (expressed as a fraction, as shown above) is viewed as having a value of "1". You know these facts. Now put them to good use!