Metric Units & Converting Between Them

Why are metric units regarded as easier to work with than imperial units?

Metric units are very nice to work with, since they are all multiples of ten (or a hundred, or one-tenth, etc) of each other.

You can convert between the various different sizes by merely moving the decimal point the correct number of places in the correct direction. 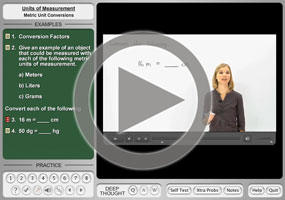 What are the basic units of measure in the metric system?

The basic metric units are meters (for length), grams (for mass or weight), and liters (for volume). And the different units convert into one another rather nicely, with one milliliter equalling one cubic centimeter (where one Cubic Centimeter is the "cc" of medical shows on television) and one gram being the mass (or weight) of one cc of water.

What are the commonly used metric prefixes?

There are many metric-unit prefixes, but the usual ones required in school are these: kilo-, hecto-, deka-, deci-, centi-, and milli-. To convert between the various prefixes, and thus the variously-sized units, you just move up and down this list of prefixes, moving the decimal point as you go.

How can I keep track of the order of the prefixes?

To remember the prefixes in order, you can use the following sentence:

The first letters of the words stand for the prefixes, with "Usually" in the middle standing for the "unit", being meters, grams, or liters. Many memory phrases omit the "Usually", and consequently students forget where the basic unit goes, messing up their conversions. Leave the "Usually" in there so you can keep things straight:

Since each step is ten times or one-tenth as much as the step on either side, we have:

Alternatively, we can go from the smallest prefix to the largest:

The point here is that you move from one prefix to the next by moving the decimal point one place, and filling in, as necessary, with zeroes. To move to a smaller unit (that is, to move to a unit whose prefix is some number of places further to the right in the listing), you move the decimal place to the right that same number of places, and vice versa. Together with the prefix sentence ("King Henry..."), this makes conversion between the different metric sizes very simple.

How do you know which way to move the decimal point when converting between metrix prefixes?

What is an example of converting between differently prefixed metric values?

It's five jumps, to the right. So I move the decimal point five places to the right, filling in the extra space with zeroes:

(You don't have to make a loopy arrow like I did, but the loops help you keep track of the steps that you're counting, and make it *really* easy to see where to add the zeroes, if you need to.)

In this case, after moving the decimal point and adding the zeroes, my answer is:

What are the steps for converting between differently-sized metric units?

That's all there is to metric conversions. As long as you keep the prefixes straight and remember where in the sequence the "units" name goes, you'll be fine. Just count the number of jumps and note the direction; then move the decimal point the same direction and the same number of places.