Converting Between Decimals, Fractions, and Percents

The process of converting from fractions to percentages starts out the same as does the process for converting from fractions to decimals, but the final answer can come in a couple different formats. You always start by doing the long division (because fractions are division, remember!), and then (usually) you move the decimal point two places to the right and slap on a "%" sign, and you're done. For example:

First, I did the division to convert the fraction to a decimal. Then I moved the decimal point two places to the right, and slapped on a "%" symbol. 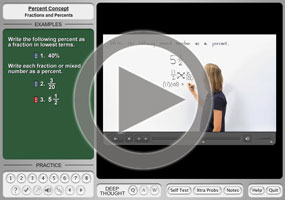 The long division gave me a decimal with three decimal places. This meant that, even after moving the dot, my percentage would have a decimal place. This is perfectly okay. Percentages do not have to be whole numbers.

You can use the Mathway widget below to practice converting fractions into percentages. Try the entered exercise, or type in your own exercise. Then click the button and select "Convert to a Percentage" from the pop-up box to compare your answer to Mathway's. (Or skip the widget and continue with the lesson.)

However, sometimes the "decimal expansion" doesn't end; that is, your long division will never be done. This is where the percentage can come in a couple different formats. You can either round the answer, or else you can use a fraction inside the percentage. For instance:

You could round this to, say, 0.389 = 38.9%. But if you aren't supposed to round, then you'll need to pull out a sheet of paper and do the long division. You'll need to get TWO decimal places of answer across the top, and then look at the remainder at the bottom. For this fraction, the long division looks like this:

Fractions are division, so I took the 7 and divided it by the 18. I kept going until I had TWO decimal places (the ".38") across the top. At that point, the remainder was 16.

If you think back to elementary school, you'll recall that you handle remainders by putting them over the divisor (18, in this case), and tacking the resulting fraction onto whatever is the number across the top. In this case, my fraction is , so I get:

So , expressed as an unrounded percentage, is . This probably looks a little weird, so let's do a couple more examples.

This decimal doesn't end, so I'll do the long division by hand:

I moved the decimal point two places to the right, tacked on the fractional part, and added the "%" sign.

Here's a messier example that you won't have memorized:

This decimal expansion doesn't end, so I'll do the long division by hand:

I put the remainder over the divisor, and simplified the resulting fraction. Then I moved the decimal point two places to the right, tacked on the (reduced) fraction, and added the "%" symbol.