Converting Between Decimals, Fractions, and Percents

Converting any terminating decimal into a fraction is fairly straightforward. You count the number of decimal places, move the decimal point that number of places to the right, and put the resulting number over "1" followed by that number of zeroes.

This decimal has one decimal place, so I move the decimal point one place to the right, to get 7. Then I put this over "1" followed by one zero (otherwise known as "10") to get: 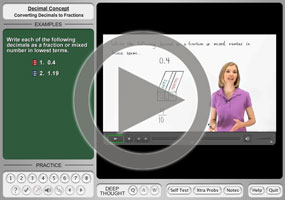 To call a decimal a "terminating" decimal means that "it ends", unlike, say, the decimal for , which goes on forever.

A non-terminating AND NON-REPEATING decimal CANNOT be converted to a fraction, because it is an "irrational" (non-fractional) number.

Any terminating decimal can be converted to a fraction by counting the number of decimal places, and putting the decimal's digits over 1 followed by the appropriate number of zeroes. For example:

The decimal had two decimal places, so I moved the dot two units to the right, and then put the resulting number (namely, "46") over "1" followed by two zeroes (otherwise known as "100"). Then I simplified.

This decimal had one decimal place. I moved the dot one place to the right, and put the resulting number (namely, "15") over "1" followed by one zero (otherwise known as "10"). Then I simplified.

This decimal also had only the one decimal place, so the process when the same as before. It's okay to have multiple digits to the left of the decimal point in the original decimal form. You'll just end up with a larger improper fraction when you're done converting.

This decimal had four decimal places, though only one digit of interest (namely, the "3"). I moved the dot four places to the right, and put the resulting number over "1" followed by four zeroes (otherwise known as "10,000"). The resulting fraction didn't simplify at all.

In the case of a repeating decimal, the following procedure is often used. Suppose you have a number like 0.5777777.... This number is equal to some fraction; call this fraction "x". That is:

There is one repeating digit in this decimal, so multiply x by "1" followed by one zero; that is, multiply by 10:

Now subtract the former from the latter:

Don't worry about "the last 7" at the "end" of the subtraction above. Because these decimals never end (that is, because they're non-terminating, repeating decimals), there is no "last 7", and the subtraction works. It's one of the weird but useful things about infinity.

Solving by dividing through by 999, I get:

You can use the Mathway widget below to practice converting decimals to fractions. Try the entered exercise, or type in your own exercise. Then click the button to compare your answer to Mathway's. (Or you can continue with this lesson.)

Decimal-to-percent conversions are simple: just move the decimal point two places to the right, and slap on a "%" sign. (To keep straight in which direction you're moving the dot, just remember that $0.50 is one-half, or 50%, of a dollar.) For example:

I moved the dot two places to the right. Because they gave me a number with something non-zero to the left of the decimal point, I ended up with a three-digit percentage. That's perfectly okay. Percentages greater than 100% just mean that I've got a lot of whatever they're measuring.

In this case, they gave me a number with zeroes between the decimal point and the first non-zero digit. So, even after moving the dot two places to the right, I still had decimal places. This is perfectly okay. It just means that I've got very little of whatever they're measuring.

If you remember that fractions are division, then this is easy. The calculator can do the work for you, because you can just have it do the division. For example:

I did the long division, which yielded a terminating decimal.

In this case, I got a non-terminating decimal when I did the long division. But the decimal repeated its one digit, with the remainder always being the same, so this is a repeating decimal. The bar is placed over the repeating portion, as a convenient way of indicating that the repeating part is the digit "3".

In this case, I continued the long division for quite a ways, to be sure of the result. In practical terms, though, as soon as I got to a repeated remainder, I was done, because every step after that must necessarily repeat the steps that came before. As soon as I got a remainder of 2, I'd reached the repetition point. (Do the long division yourself, if you're not sure.) In this case, there are six digits that repeat, so the repetition bar is over a six-digit block.

The rounded form can be useful for word problems, where a final answer in rounded form may be more practical than a repeating decimal. By the way, there is nothing sacred about my rounding above; unless you're given a specified number of decimal places to which to round, you can use whatever feels reasonable to you. To me, in this particular instance, rounding to three decimal places felt right.