In general, you round to a given place by looking at the digit one place to the right of the "target" place. If the digit is a five or greater, you round the target digit up by one. Otherwise, you leave the target as it is. Then you replace any digits to the right with zeroes (if they are to the left of the decimal point) or else you delete the digits (if they are past the decimal point). 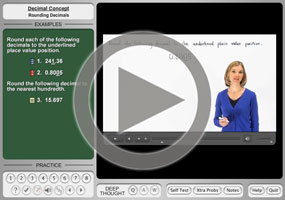 I've drawn a little line separating the fifth place from the sixth place. This can be a handy way of "keeping your place", especially if you are dealing with lots of digits.

First, I go back to the original number (not the one I just rounded in the previous example). I count off four places, and look at the number in the fifth place:

The number in the fifth place is a 9, which is greater than 5, so I'll round up in the fourth place, truncating the expansion at four decimal places. That is, the 5 becomes a 6, the 9265... part disappears, and π, rounded to four decimal places, is:

First, I ignore my result from the previous exercise and instead go back to the original number. I count off three decimal places, and look at the digit in the fourth place:

The number in the fourth place is a 5, which is the cut-off for rounding: if the number in the next place (after the one you're rounding to) is 5 or greater, you round up. In this case, the 1 becomes a 2, the 59265... part disappears, and π, rounded to three decimal places, is:

Rounding works the same way when they tell you to round to a certain named "place", such as "the hundredths place". The only difference is that you have to be a bit more careful in counting off the places you need. Just remember that the decimal places count off to the right in the same order as the counting numbers count off to the left. That is, for regular numbers, you have the place values:

For decimal places, you don't have a "oneths", but you do have the other fractions:

"The nearest thousandth" means that I need to count off three decimal places (tenths, hundredths, thousandths), and then round:

Then π, rounded to the nearest thousandth, is:

You might be tempted to write this as "2.8", but, since you rounded to the hundredths place (to two decimal places), you should write both decimal places.

Otherwise, it looks like you rounded to one decimal place, or to the tenths place, and your answer could be counted off as being incorrect.