What is a linear equation?

"Linear" equations are equations containing just a plain old variable like "x", rather than something more complicated like x2, or x/y, or square roots, or other more-complicated expressions. Linear equations are the simplest equations that you'll deal with. 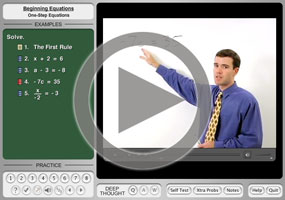 Back in your early years, when you were learning addition, your teacher probably gave you worksheets to complete that had exercises like the following:

Once you'd learned your addition facts well enough, you knew that you had to put a "2" inside the box.

What does it mean to solve an equation?

How do you solve by addition or subtraction?

To solve a linear equation by addition or subtraction, you take the number that's with the variable (in x + 3 = 5, this would be the number 3. You would note how this number is connected to the variable (in this case, it is added on), and you would do the opposite to both sides of the equation (in this case, by subtracting 3 from both sides of the equation).

The variable is the letter x. To solve this equation, I need to get the x by itself; that is, I need to get x on one side of the "equals" sign, and some number on the other side.

Since I want just x on the one side, this means that I don't like the "plus six" that's currently on the same side as the x. Since the 6 is added to the x, I need to subtract this 6 to get rid of it. That is, I will need to subtract a 6 from the x in order to "undo" their having added a 6 to it.

This brings up the most important consideration with equations:

We have to be totally, totally fair to the two sides, or unhappiness will ensue!

Whatever you do to an equation, do the EXACT SAME thing to BOTH sides of that equation!

Probably the best way to keep track of this subtraction of the 6 from both sides is to format your work this way:

The above image is animated on the "live" page.

What you see here is that I've subtracted 6 from both sides, drawn a horizontal "equals" bar underneath the entire equation, and then added down. On the left-hand side (LHS) of the equation, this gives me:

On the right-hand side (RHS) of the equation, I have:

The solution is the last line of my work; namely:

The same "undo" procedure works for equations in which the variable has been paired with a subtraction.

The variable is on the left-hand side (LHS) of the equation, and it's paired with a "subtract three". Since I want to get x by itself, I don't like the "3" that's currently subtracted from it. The opposite of subtraction is addition, so I'll undo the "subtract 3" by adding 3 to both sides of the equation, and then adding down to simplify to get my answer:

You may be instructed to "check your solutions", at least in the early stages of learning how to solve equations.

How do you check your solution?

To check your solution to a given equation, you just plug your answer value into the original equation (in place of the variable), and make sure that you end up with a true statement. This is, after all, the definition of the solution to an equation; namely, the solution is any value, or set of values (for more complicated equations, later on), which makes the original equation a true statement.

Because each side of the original equation now evaluates to the exact same thing, this confirms that the solution is indeed correct.

In this equation, I've got a three that's subtracted from the variable. To undo the subtraction, I'll add three to either side of the equation.

The "checking" part is what I just did above. I've made sure to label things clearly, so the grader is able to find my "check" (so I'll get full credit on the exercise). My final answer is:

This equation is almost solved. But not quite. I don't have plain old x on the right-hand side; instead, I've got −x. What to do?

I can kind-of think of the −x as being 0 − x. So what would happen if I added x to each side of the equation?

Okay; that kinda helped. By taking the variable and "adding it over to the other side", I've now got the variable in a format I like (in other words, without the "minus" sign on it). And this has also converted the original equation into a simple one-step equation. I'll get rid of the 2 from the left-hand side by "subtracting it over to" the right-hand side:

Technically, that last example was a two-step equation, because solving it required adding one thing to both sides of the equation, and then subtracting another thing to both sides. The important thing to notice is that you can add and subtract variables to the other side of an equation, just like you can add and subtract numbers to the other side. The exact same methods work with both variables and numbers.

You can use the Mathway widget below to practice solving a linear equation by adding or subtracting. Try the entered exercise, or type in your own exercise. Then click the button to compare your answer to Mathway's. (Or skip the widget and continue with the lesson.)