For multi-step linear equations, we'll be using the same steps as we have previously; the only difference is that we won't be done after one step. We'll still have to do at least one more step. In what order should these steps be done? Well, that's going to vary with the equation, but there are some general guidelines which can prove helpful. 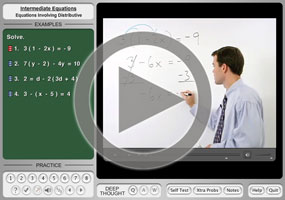 The variable is on the left-hand side (LHS) of the equation. It is currently multiplied by seven, and then it has a two added to it. I need to undo the "times seven" and the "plus two".

There is no rule about which "undo" operation I should do first. However, if I first divide through by 7, I'm definitely going to create fractions. Personally, I prefer to avoid fractions if possible, so I almost always do any plus / minus before any times / divide. I might end up having to deal with fractions anyway, but at least I can put them off until closer to the end of my work.

Starting with the "plus two" first, I'll subtract two from either side of the equation. Only then will I divide through by the seven. My work looks like this:

By doing the plus / minus first, I avoided fractions. As you can see, the answer doesn't involve fractions, so I did myself a favor by doing the dividing-through last. My solution is:

Formatting your homework and showing your work in the manner I have done above is, in my experience, fairly universally acceptable. However (warning!), it is also a good idea to clearly rewrite your final answer at the end of each exercise, as shown (in purple) above. Don't expect your grader to take the time to dig through your work and try to figure out what you probably meant your answer to be. Format your work so as to make your meaning clear.

In this equation, the variable (on the left-hand side) is multiplied by a minus five, and then a seven is subtracted from it. In hopes (as always!) of avoiding fractions, I'll add seven to either side of the equation first. Only then will I divide through by the minus five. My work looks like this:

I've shown my work neatly. Now I'll clearly rewrite my solution at the end of my work:

The variable (on the left-hand side of the equation) is multiplied by a three, and then a nine is subtracted from it. I'll take care of the nine first, and then the three:

In this case, again, my solution has no fractions:

In this equation, I have two terms on the left-hand side that contain variables. So my first step is to combine these "like terms" on the left. Then I can solve:

So now my equation is:

Even though it might initially have looked more complicated, this is actually a one-step equation. I'll solve by dividing through by twelve:

There is no rule saying which of the two terms I should move, the 4x or the 6x. However, I've learned from experience that, to avoid negative coefficients on my variables, I should move the x term with the smaller coefficient. That means, in this case, that I'll subtract the 4x from the left-hand side over to the right-hand side:

And now I have a one-step equation, which I'll solve by dividing through by two:

However (warning!), I have heard that some instructors insist that the variable be placed on the left-hand side of the equation in the final answer. (No, I'm not making this up.) So, even though the "–3 = x" is perfectly valid in the working, those instructors will count this as "wrong" if you leave the answer this way. If you have any doubts about your instructor's formatting preferences, ask now.

At this point, I've got a one-step equation which requires one division to solve:

If, in the above, I'd done the first two steps at one go, it would have looked like this:

It's probably a good idea, when you're just starting out, to do each step separately. But once you get comfortable with the process (and are reliably arriving at the correct values), feel free to start combining some steps.

This equation is all kinds of messy! Before I can solve, I'll need to combine the like terms on either side of the equation:

Now that I've simplified each side of the equation, I can do the solving.

I added the (usually unstated) 1 to the variable term on the right-hand side of the original equation in order to help me keep track of what I was doing; it isn't "necessary". And it isn't expected on the final answer, which is properly stated as:

It is perfectly fine for x to have a value of zero. Zero is a valid solution. Do not say that this equation has "no solution"; it does indeed have a solution, that solution being x = 0.

This equation solves just like all the other linear equations I've done. It just looks worse because of the decimals. But that's easy to fix!

Now I can solve as usual:

Just because the original equation had decimal places, doesn't mean that I'm stuck working with them. File this trick away for later; it'll come in handy.

Ick! Fractions! But, just as with the decimals in the previous exercise, I don't have to be stuck with fractions. In this case, I'll be multiplying through to "clear" the denominators, giving me a nicer equation to solve.

This is now a much nicer equation to work with. I'll continue my solution by subtracting the smaller 2x from either side:

I'll remove the 1 from the variable when I write my final answer:

You can use the Mathway widget below to practice solving a multi-step linear equation. Try the entered exercise, or type in your own exercise. Then click the button to compare your answer to Mathway's. (Or skip the widget and continue with the lesson.)