Numbers are classified according to type. The first type of number is the first type you ever learned about: the counting, or "natural" numbers:

The next type is the "whole" numbers, which are the natural numbers together with zero:

(The number zero, spread from India by north-African scholars, was originally viewed by European authorities as being demonic.) 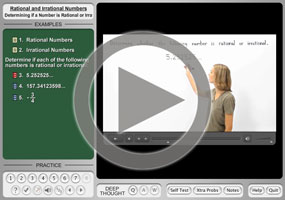 Then come the "integers", which are zero, the natural numbers, and the negatives of the naturals:

The next type of number is the "rational", or fractional, numbers, which are technically regarded as ratios (divisions) of integers. In other words, a fraction is formed by dividing one integer by another integer.

Putting these two major classifications, the rationals and the irrationals, together in one set gives you the "real" numbers. Unless you have dealt with complex numbers (the numbers with an "i" in them, such as 4 − 3i), then every number you have ever seen has been a "real" number. "But why", you ask, "are they called 'real' numbers? Are there 'pretend' numbers?" Well, yes, actually there are, though they're actually called "imaginary" numbers; they are what is used to make the complex numbers, and "imaginary" is what the "i" stands for.

The commonest question I hear regarding number types is something along the lines of "Is a real number irrational, or is an irrational number real, or neither... or both?" Unless you know about complexes, everything you've ever done has used real numbers. Unless the number has an "i" in it, it's a real.

Here are some typical number-type questions (assuming that you haven't yet learned about imaginaries and complexes):

Since any integer can be formatted as a fraction by putting it over 1, then this statement is true.

True! In decimal form, a number is either non-terminating and non-repeating (so it's an irrational) or else it's not (so it's a rational); there is no overlap between these two number types!

Classify according to number type; some numbers may be of more than one type.

This is a terminating decimal, so it can be written as a fraction: . Since this fraction does not reduce to a whole number, then it's not an integer or a natural. And everything is a real, so the answer is: rational, real

You probably recognize this as being π, though this may be more decimal places than you customarily use. The point, however, is that the decimal does not repeat, so π is an irrational. And everything (that you know about so far) is a real, so the answer is: irrational, real

Don't let this fool you! Yes, you often use something like this as an approximation of π, but it isn't π! This is a rounded decimal approximation, and, since this approximation terminates, this is actually a rational, unlike π itself, which is irrational! The answer is: rational, real

Obviously, this is a counting number. That means it is also a whole number and an integer. Depending on the text and teacher (there is some inconsistency), this may also be counted as a rational, which technically-speaking it is. And of course it's also a real. The answer is: natural, whole, integer, rational (possibly), real

This is a fraction, so it's a rational. It's also a real, so the answer is: rational, real

This can also be written as , which is the same as the previous problem. The answer is: rational, real

Your first impulse may be to say that this is irrational, because it's a square root, but notice that this square root simplifies: , which is just an integer. The answer is: integer, rational, real

This number is stated a fraction, but notice that it reduces to −3, so this may also count as an integer. The answer is: integer (possibly), rational, real

Except for the section in your book where you have to classify numbers according to type, you really won't need to be terribly familiar with this hierarchy. It's more important to know what the terms mean when you hear them. For instance, if your teacher talks about "integers", you should know that the term refers to the counting numbers, their negatives, and zero.