In all the previous exercises we've done, the equations we were given had been solved for one of the variables, usually the y. Sometimes, though, we are given equations that have not been solved. In such a case, it is usually easiest to do some algebra first, to solve the equation (usually for "y =") to make our lives simpler. (You may have seen this called "solving literal equations".) It is not required that we do the algebra first, but we can solve the equation first and then just plug-n-chug, or we can plug into the equation as given and then do the solving for each plug-in value. The former is usually a time-saver over the latter. 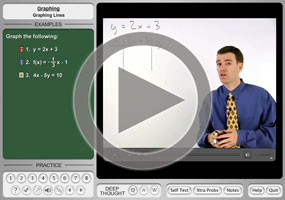 For this example, it's simplest to first solve for "y =". This is especially true if I'm using a graphing calculator to fill in my T-chart, because graphing calculators can only handle line equations when they're in the form "y =". So, to make my like easier, I'll solve this equation algebraically first.

So I'm actually graphing this equation:

Since I'm going to be multiplying my x-values by a fraction, it will be simplest to pick x-values that are multiples of 3, so the denominator will cancel out.

So, after swapping the sides to put things in the usual format, my equation is:

Okay, so computing the plot points for this one is going to be messy, what with all the fractions. I'll do the best I can for the T-chart, remembering that I'll just be doing the best I can when I go to plot my points:

From these points, I draw my graph:

Note that this graph needed to be larger (in terms of the minimum and maximum axis values) than what I've drawn before. That's because the points were "messy", so I needed more points, and I needed those points to be further apart, in order to make sure my line was right. This is an example of a graph for which it is worth it to take the extra time and be careful!

Rarely, you'll see a graphing exercise that involves decimals. Converting to fractions might be helpful, in that you'll be able to see what sorts of x-values might be more helpful.

The decimal 0.4 is the same as the fraction . So I can regard this equation as being:

This tells me that picking x-values which are multiples of 5 will be more likely to give me nice, neat plot points. Here's my T-chart:

Even if I skip a few of the points at the ends (which I think I will), this is gonna be a wide graph, at least in terms of the scale.

By the way, there are other methods for graphing straight lines, such as graphing from the intercepts or graphing from the y-intercept and the slope. You should expect to be required to be able to use any method that has been (or will be) introduced in your class.

You can use the Mathway widget below to practice finding the graph of a straight line from a table of values. Then click the button and choose "Use a Table of Values to Graph the Equation" from the pop-up box to compare your answer to Mathway's. (If you've picked your x-values to be multiples of 5, your table's values will almost certainly be "nicer" to plot than will be Mathway's. But your line should be the same as theirs.)