Sometimes we are given a formula, such as something from geometry, and we need to solve for some variable other than the "standard" one.

For instance, the formula for the perimeter P of a square with sides of length s is P = 4s. We might, for whatever reason, need to solve this equation for s. This process of solving a formula for a specified variable (or "literal") is called "solving literal equations". 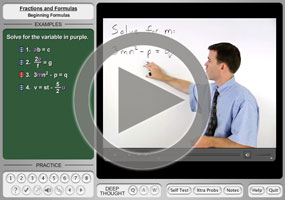 One of the dictionary definitions of "literal" is "related to or being comprised of letters", and variables are sometimes referred to as literals. So "solving literal equations" is another way of saying "taking an equation with lots of letters, and solving for one letter in particular."

At first glance, these exercises appear to be much worse than our usual solving exercises, but they really aren't that bad. We pretty much do what we've done all along for solving linear equations and other sorts of equation. The only substantial difference here is that, due to all the variables, we won't be able to simplify our work as we go along, nor as much as we're used to at the end.

If they'd asked me to solve 3 = 2b for b, I'd have divided both sides by 2 in order to isolate (that is, in order to get by itself, or solve for) the variable b. I'd end up with the variable b being equal to a fractional number.

In this case, I won't be able to get a simple numerical value for my answer, but I can proceed in the same way, using the same step for the same reason (namely, that it gets b by itself). So, following the same reasoning for solving this literal equation as I would have for the similar one-variable linear equation, I divide through by the "h":

The only difference between solving the literal equation above and solving the linear equations you first learned about is that I divided through by a variable instead of a number (and then I couldn't simplify, because the fraction was in letters rather than in numbers). Because we can't simplify as we go (nor, probably, can we simplify much at the end), it can be very important not to try to do too much in your head. Write everything out completely; this will help you end up with the correct answers.

This equation is the "uniform rate" equation, "(distance) equals (rate) times (time)", that is used in "distance" word problems, and solving this for the specified variable works just like solving the previous equation.

The variable they want has a letter multiplied on it; to isolate the variable, I have to divide off that letter. So I'll solve for the specified variable r by dividing through by the t:

This is the formula for the perimeter P of a rectangle with length L and width w.

If they'd asked me to solve 3 = 2 + 2w for w, I'd have subtracted the "free" 2 over to the left-hand side, and then divided through by the 2 that's multiplied on the variable. I can follow the exact same steps for this equation:

Note: I've been leaving my answers at the point where I've successfully solved for the specified variable. But this means that the variable in question has been on the right-hand side of the equation. This isn't "wrong", but some people prefer to put the solved-for variable on the left-hand side of the equation. If you prefer this, then the above answer would have been written as:

Either format is fine, mathematically, as they both mean the exact same thing.

The variable I need to isolate is currently inside a fraction. I need to get rid of the denominator. To do this, I'll multiply through by the denominator's value of 2. On the left-hand side, I'll just do the simple multiplication. On the right-hand side, to help me keep things straight, I'll convert the 2 into its fractional form of 2/1.

If they'd asked me to solve for t, I'd have multiplied through by t, and then divided both sides by 5. Following the same reasoning and doing the same steps, I get:

This next exercise requires a little "trick" to solve it.

I need to get the variable a by itself. Currently, it's multiplied onto other stuff in two different terms. I can't combine those terms, because they have different variable parts. (The first term has no other variable, but the second term also has the variable c.)

I want to divide off the stuff that's multiplied on the specified variable a, but I can't yet, because there's different stuff multiplied on it in the two different places. But what if I factor the a out front?

The "trick" came in the second line, where I factored the a out front on the right-hand side. By doing this, I created one (big, lumpy) multiplier on a, which I could then divide off.

This technique (factoring out to allow for dividing through) doesn't come up often, but it's just about guaranteed to come up in your homework once or twice, and almost certainly on your next test — precisely because so many students don't see the "trick". So keep in mind: When you can't isolate the desired variable because it is a factor in two or more terms, you need to collect those terms together on one side of the "equals" sign, factor out the desired variable, and then divide through by whatever is left after you factored.

Since each of the two fractions on the right-hand side has the same denominator of 2, I'll start by multiplying through by 2 to clear the fractions. Then I'll work toward isolating the variable h.

This example used the same "trick" as the previous one. In the fourth line, I factored out the h. You should expect to need to know how to do this!

This is a big, lumpy equation, but the solution method is the same as always. The variable I want has some other stuff multiplied onto it and divided into it; I'll divide and multiply through, respectively, to isolate what I need.