While there are infinitely-many different literal equations, some kinds are more likely to be important, and sooner, than other. Probably one of the most important classes of literal equations we often need to solve will be linear equations.

For whatever reason, there are different formats for simple linear equations. I prefer the slope-intercept form; at times, the point-slope form is helpful; some textbooks strongly prefer what they sometimes call the "intercept" form, which is often (though not always) given as being "Ax + By = C", so-called because the intercepts are at and . (Still others prefer a "standard" form, for which there is no actual standard. But I digress.) 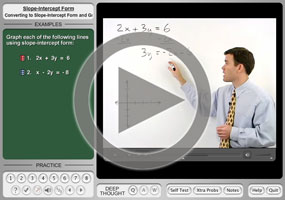 Whatever the original form of a linear equation, it is often helpful, especially for graphing, to have the equation rearranged into "y=" form. Solving a linear equation in two variables for y= is a type of literal-equation solving. Here's how it works:

In order to find the slope, it is simplest to put this line equation into slope-intercept form. If I rearrange this line to be in the form "y = mx + b", it will be easy to read off the slope m. So I'll solve:

I know that the slope of the line is whatever number is multiplied on the x, so my answer is:

I know that, if I can solve the equation for y=, I'll be able to read the values of the slope m and the y-intercept b right off of the equation. So I'll solve for "y=":

Now that I have the equation rearranged into slope-intercept form, I can read the values I need right from the equation:

I could go to the trouble of finding two points and computing the slope, or of plugging zero in for x and solving for the y-intercept value, but it's simpler to just solve for "y=".

If I prefer, I can flip the sides of the equation, so I get:

This isn't required, but can make things look nicer. Either way, I can now read the required values from the equation:

The values here are messy, but that's okay. In fact, by simply solving the equation for y, I probably helped myself avoid making errors with the fractions. In any case, my answers are:

Sometimes, there is no particular context; they just want you to solve the equation for y.

All that, to end up with such a simple equation as my answer!

From what I've learned about slope, I know that parallel lines have the same slope, and perpendicular lines have slopes which are negative reciprocals (that is, which have opposite signs and which are flipped fractions of each other). So I can solve the literal equations for y= and compare the slopes to answer this question.

Upon closer examination, I notice that one of the equations they gave me is actually already solved for y; I'll flip the sides of the equation to put it in the "normal" order:

Now I'll solve the other equation for y:

The slopes are and . These slopes have opposite signs, so their lines are not parallel. But the slopes are the same fraction, rather than one being the flip (that is, the reciprocal) of the other, so these lines are not perpendicular, either. So my answer is:

neither parallel nor perpendicular

There are many contexts, such as graphing and solving systems of equations, in which you will want to be able to solve a linear equation for "y=". Make sure that you are comfortable with these techniques.