One definition of "to translate" is "to change from one place, state, form, or appearance to another". When we take a function and tweak its rule so that its graph is moved to another spot on the axis system, yet remains recognizably the same graph, we are said to be "translating" the function.

Usually, translation involves only moving the graph around. Squeezing or stretching a graph is more of a "transformation" of the graph. But these two topics are usually taught at the same time, and usually under the same name. Just be aware that the topic of "function translation" often includes function transformation, and vice versa. 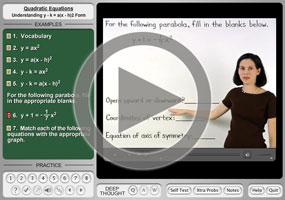 To get started, let's consider one of the simpler types of functions that you've graphed; namely, quadratic functions and their associated parabolas.

When you first started graphing quadratics, you started with the basic quadratic:

Then you did some related graphs, such as:

In each of these cases, the basic parabolic shape was the same. The only difference was where the vertex was, and whether it was right-side up or upside-down.

If you've been doing your graphing by hand, you've probably started noticing some relationships between the equations and the graphs. The topic of function transformation makes these relationships more explicit.

Moving up and down

Let's start with the function notation for the basic quadratic:

A function transformation takes whatever is the basic function f (x) and then "transforms" it (or "translates" it), which is a fancy way of saying that you change the formula a bit and thereby move the graph around.

Since the original function is being shifted downward by two units, then the new function is the old one, with a "minus two" tacked onto the end:

Then the new function is:

This is always true: To shift a function left, add inside the function's argument: f (x + b) gives f (x)shifted b units to the left. Shifting to the right works the same way; f (x − b) is f (x) shiftedb units to the right.

Warning: The common temptation is to think that f (x + 3) moves f (x) to the right by three, because "+3" is to the right. But the left-right shifting is backwards from what you might have expected.

This process will tell you where the x-values, and thus the graph, have shifted. At least, that's how I was able to keep track of things. Yes, I had trouble with this concept, too.

But they haven't told me to express the new function in terms of the old. They want the actual expression for the rightward shift. So I'll need to do some algebra, plugging in a "t − 1" for every instance of "t " in the original function. Fortunately, that function is really simple, so:

Then my new function is: