You've been playing with "y=" sorts of equations for some time now. And you've seen that the "nice" equations (straight lines, say, rather than ellipses) are the ones that you can solve for "y=" and then plug into your graphing calculator. These "y=" equations are functions. But the question you are facing at the moment is "Why do I need this function notation, especially when I've got perfectly nice 'y=', and how does this notation work?" 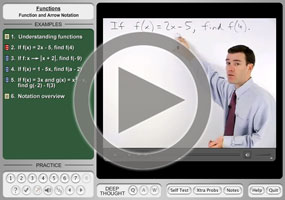 Why did your teachers switch from boxes to variables? Well, think about it: How many shapes would you have to use for formulas like the one for the area A of a trapezoid with upper base a, lower base b, and height h? The formula is as follows:

If you try to express the above, or something more complicated, using variously-shaped boxes, you'd quickly run out of shapes. Besides, you know from experience that "A" stands for "area", "h" stands for "height", and "a" and "b" stand for the lengths of the parallel top and bottom sides. Heaven only knows what a square box or a triangular box might stand for!

In other words, they switched from boxes to variables because, while the boxes and the letters mean the exact same thing (namely, a slot waiting to be filled with a value), variables are better. Variables are more flexible, easier to read, and can give you more information.

But function notation gives you greater flexibility than using just "y" for every formula. For instance, your graphing calculator will list different functions as y1, y2, etc, so you can tell the equations apart when, say, you're looking at their values in "TABLE".

In the same way, in textbooks and when writing things out, we use different function names like f (x), g(x), h(x), s(t), etc, to keep track of, and work with, more than one formula in any single context. With function notation, we can now use more than one function at a time without confusing ourselves or mixing up the formulas, leaving ourselves wondering "Okay, which 'y' is this one?" And the notation can be usefully explanatory.

From geometry, you know that "A(r) = πr2" indicates the area of a circle given in terms of the value of the radius r, while "C(r) = 2πr" indicates the circumference given in terms of the radius r. Both functions have the same plug-in variable (the "r"), but "A" reminds you that the first function is the formula for "area" and "C" reminds you that the second function is the formula for "circumference".

Remember: The notation "f (x)" is exactly the same thing as "y". You can even label the y-axis on your graphs with "f (x)", if you feel like it.

The expression "f (x)" means "a formula, named f, has x as its input variable". It does not mean "multiply f and x"!

Don't embarrass yourself by pronouncing (or thinking of) "f (x)" as being "f times x", and never try to "multiply" the function name with its parenthesised input.

Why is the input to a function called the "argument"?

The term "argument" has a long history. Originally, it was a logical term, referring to a statement that forwarded a proof or, in a less formal sense, a claim that was being used to try to convince somebody of something. Eventually, the term came to refer, in early scientific contexts, to any mathematical value that was needed as an input to other computations, or any value upon which later results depended.

In the twentieth century, when computer coding started becoming a thing, coders adopted the mathematical meaning to refer to inputs to their coding. In our mathematical context, the "argument" is the independent variable (the one for which you pick a value, usually being the x-value) and the function's output is the dependent variable (the one whose value depends upon whatever was plugged in, usually being the y-value).

I'll do the second part first. The argument is whatever is inside the parentheses, so the argument here is s.

The argument is whatever is plugged in. In this particular (unusual) case, the variable being plugged in is "y". (After all, there's no rule saying that y can't be the independent variable.) So:

the argument is y

How is a function evaluated at a number?

You evaluate "f (x)" in exactly the same way that you've always evaluated "y"; namely, you take the number they give you for the input variable, you plug it in for the variable, and you simplify to get the answer. For instance:

To keep things straight in my head (and clear in my working), I've put parentheses around every instance of the argument 2 in the formula for f. Now I can simplify:

To evaluate, I do what I've always done. I'll plug the given value (−3) in for the specified variable (x) in the given formula:

Once again, I've used parentheses to clearly designate the value being input into the formula. In this case, the parentheses are helping me keep track of the "minus" signs. Now I can simplify:

If you experience difficulties when working with negatives, try using parentheses as I did above. Doing so helps keep track of things like whether or not the exponent is on the "minus" sign. And it's just generally a good habit to develop.

An important type of function is called a "piecewise" function, so called because, well, it's in pieces. For instance, the following is a piecewise function:

As you can see, this function is split into two halves: the half that comes before x = 1, and the half that goes from x = 1 to infinity. Which half of the function you use depends on what the value of x is. Let's examine this:

This function comes in pieces; hence, the name "piecewise" function. When I evaluate it at various x-values, I have to be careful to plug the argument into the correct piece of the function.

They first want me to evaluate at x = −1. Since this is less than 1, then this argument goes into the first piece of the function. To refresh, the function is this:

Next, they want me to find the value of f (3). Since 3 is greater than 1, then I'll need to plug into the second piece of the function, so:

Finally, they want me to evaluate f (x) at x = 1. This is the only x-value that's a little tricky. Which half do I use?

Looking carefully at the rules for the functions, I can see that the first piece is the rule for x-values that are strictly less than 1; the rule does not apply when x equals 1. On the other hand, the second piece applies when x is greater than or equal to 1. Since I'm dealing here with x = 1, then the second piece's rule applies.

You can use the Mathway widget below to practice evaluating functions at a given numerical value. Try the entered exercise, or type in your own exercise. Then click the button and select "Evaluate" to compare your answer to Mathway's.