Variation problems aren't hard once you get the hang of the lingo. The only real difficulty is learning the somewhat specialized vocabulary and the techniques for this classification of problems.

Variation problems involve fairly simple relationships or formulas, involving one variable being equal to one term. That term might be linear (something with just an "x"), quadratic (something in "x2"), more than one variable (such as "r2 h"), a square root (something like ""), or something else.

But there is always just the one term in the formula; this term will be multiplied by some number and, if you don't yet know what that number is, the number is usually denoted by "k". This number k is called "the constant of variation". 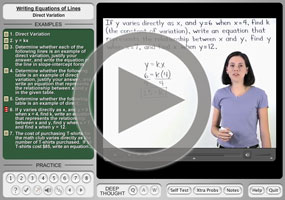 What are the keywords for variation equations?

The keywords for variation equations are:

What do these variation-equation keywords mean?

The keywords' meanings are:

An example of a variation equation would be the formula for the area of the circle:

In the language of variation, this equation means:

...and the constant of variation is k = π. This formula is an example of "direct" variation."Direct variation" means that, in the one term of the formula, the variable is "on top".

(By the way, if you see a formula with a "∝" character in it instead of an "equals" sign, that character is pronounced as "is directly proportional to", and indicates that they've given you a direct-variation equation, but without telling you what the variation constant is.)

On the other hand, "inverse variation" means that the variable is underneath, in the bottom of a fraction. Suppose, for instance, that you inherit a money market account containing $100,000, and you wonder how much money your rich uncle initially invested eight years ago. Depending on the average interest rate "r", the formula you would use would be:

...where P is the principal that your uncle invested. (This formula is a variant of the compound-interest formula, by the way.) In the language of variation, this formula reads as:

the principal P varies inversely with

The other case of variation is "jointly". "Joint variation" means "directly, but with two or more variables". An example would be the formula for the area of a triangle with base "b" and height "h":

the area A varies jointly with b and h

The constant of variation for this equation is .

Be careful with those middle two statements above. Almost always, when you translate word problems from English into math, "and" means "plus" or "added to". But in joint variation, "and" just means "both of these are together on the same side of the fraction" (usually on top), and you multiply. If you are supposed to add two variables, they'll use the format in that third bulleted example above, or they'll say "varies as the sum of x and y.

(If they have you working with something that varies "directly" with one thing and "inversely" with another thing, this may be referred to as a "combined" variation.)

What are some examples of solving variation equations?

Now that I have k, I can rewrite the formula completely:

With this, I can answer the question they actually asked: "Find y when x = 1."

Then the answer is:

Translating the formula from English to math, I get:

Plugging in the data point they gave me, and solving for the value of k, I get:

Then the answer is:

This one is somewhat complex. I'll work in small pieces.

"The difference of w and x" means:

The square of this difference is:

This expression will go on the bottom of the fraction, and the variation constant k will go on top, so my equation so far is:

In order to find the complete equation for y, I'll need to find the value of the constant. To do this, I'll plug in the values they gave me:

Now I have all the parts of my equation, and my answer is: