The only difference, really, will be in the care one needs to take — along with perhaps needing an application of the formal process for finding the GCF. 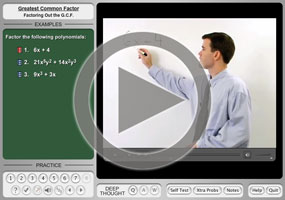 Being careful of my signs, I factor:

At first glance, it doesn't look like anything is common to all three terms. But then I remember that I should probably see if I can simplify the square roots first. I'll work with each of the terms separately.

Okay, so my common factor, in addition to the square root, will be 13xy. What is left from each of the terms (to go inside the parentheses)? I'll list these out nicely, too, working from what I did above:

With this, I can do my factorization. As I go, I'll be careful to insert the correct signs between the terms.

Huh. I hadn't even noticed that I could combine two of the terms. But the 6 and the 2 will obviously simplify. My final answer then is:

You can use the Mathway widget below to practice factoring by pulling the GCF out of each of the terms of a polynomial. Try the entered exercise, or type in your own exercise. Then click the button to compare your answer to Mathway's. (Or skip the widget and continue with the lesson.)

First, I'll take the common factor out front, and then I'll draw an open-paren:

From the first term, I have a 2 left over; this starts my parenthetical:

From the second term, I have a "–b" left over; this finishes my parenthetical:

I've ended up with the factored form being the product of two binomials. This is the "undo" of what is commonly referred to as "FOILing", or multiplying two binomials. My final answer is:

If the parentheticals had been "x + 2" and "2 + x", the factors would have been the same; that is, I could have reversed the terms in one of the factors, to make it match the other factor, because order doesn't matter for addition.

What happens when we reverse a subtraction? To figure this out, take a look at the following numerical subtractions:

This is always true: When you flip a subtraction, you also flip the sign out front.

(Note: When reversing a subtraction, it can be helpful to put parentheses around the new subtraction, with a "minus" sign out front.)

For the expression they've given me, flipping the subtraction results in:

By reversing the subtraction in the second parenthetical, I have created a common factor. Now I can proceed as I had in the previous example:

These last two examples lead us to the next topic: factoring "in pairs".