Many problems lend themselves to being solved with systems of linear equations. In "real life", these problems can be incredibly complex. This is one reason why linear algebra (the study of linear systems and related concepts) is its own branch of mathematics.

In your studies, however, you will generally be faced with much simpler problems. What follows are some typical examples. 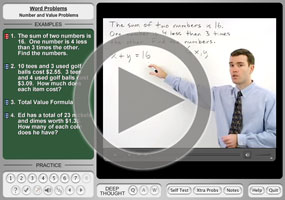 In the past, I would have set this up by picking a variable for one of the groups (say, "c" for "children") and then use "(total) less (what I've already accounted for)" (in this case, "2200 − c") for the other group. Using a system of equations, however, allows me to use two different variables for the two different unknowns.

number of adults: a

With these variables, I can create equations for the totals they've given me:

Now I can solve the system for the number of adults and the number of children. I will solve the first equation for one of the variables, and then substitute the result into the other equation:

Now I can back-solve for the value of the other variable:

I now have values for both of my two variables. I can look back at my definitions for the variables in order to interpret these values within context. To answer the original question, there were:

You will probably start out with problems which, like the one above, seem very familiar. But you will then move on to more complicated problems.

The trick here is to work with the digits explicitly. I'll use "t" for the "tens" digit of the original number and "u" for the "units" (or "ones") digit. I then have:

The new number has the values of the digits (represented by the variables) in reverse order. This gives me:

And this new number is twenty-seven more than the original number. The keyword "is" means "equals", so I get:

Now I have a system of equations that I can solve:

After reordering the variables in the first equation, I now have:

Adding down, I get:

How can I find a parabola's equation from just three points?

To find the parabola's equation, you'll plug the values from each of the three (x, y) pairs into y = ax2 + bx + c. This will give you three equations in three unknowns, those unknowns being the coefficients, a, b, and c.

(If they've given you "nice" points like, say, all three intercepts, then life is pretty easy. You'd take the x-intercept values, convert them to factors of the quadratic, and then use the third intercept to find the value of any multiplier. Supposing the x-intercepts are at −3 and +2; then the factors would be x + 3 and x − 2, which multiply to x2 + x −6. If you plug zero in for x, you'll get −6. If the y-intercept is actually at y = −12, then you know that you need to multiply through by 2, so the equation is y = 2x2 + 2x − 12. Easy-peasy.

(But what does it look like when they give you not-nice points?)

Recalling that a parabola has a quadratic as its equation, I know that I am looking for an equation of the form ax2 + bx + c = y. Also, I know that points are of the form (x, y). Practically speaking, this mean that, in each of these points, they have given me values for x and y that make the quadratic equation true. Plugging the three points in the general equation for a quadratic, I get a system of three equations, where the variables stand for the unknown coefficients of that quadratic:

Simplifying the three equations, I get:

You may also see similar exercises referring to circles, using:

...or other conics, though parabolas are the most common. Keep in mind that projectile problems (like shooting an arrow up in the air or dropping a penny from the roof of a tall building) are also parabola problems, using:

All of these different permutations of the above example work the same way: Take the general equation for the curve, plug in the given points, and solve the resulting system of equations for the values of the coefficients. Warning: If you see an exercise of this sort in the homework, be advised that you may be expected to know the forms of the general equations (such as "ax2 + bx + c = y" for parabolas) on the next text.