Special Angle Values: How to Remember Them

There are a few (a very few) angles that have relatively "neat" trigonometric values, involving, at worst, one square root. Because of their relatively simple values, these are the angles which will typically be used in math problems (in calculus, especially), and you will be expected to have these angles' values memorized.

You will be expected to use these values to provide "exact" answers for solving right triangles and for finding the values of various trigonometric ratios.

Usually, textbooks present these values in a table that you are expected memorize. But pictures are often easier to recall on tests, etc, at least for some of us. If those tables aren't working for you, then this lesson will show the way in which many people (including me!) really keep track of these values. 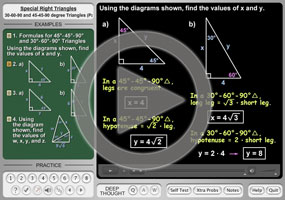 In what follows, I use degrees for the angle measures. This is usually how students are introduced to angle measures. However, in case you're working with radians, I'll also note the radian angle-measure equivalents.

The hypotenuse of this triangle, shown above as 2, is found by applying the Pythagorean Theorem to the right triangle with sides having length . The base angle, at the lower left, is indicated by the "theta" symbol (θ, THAY-tuh), and is equal to 45°. So how does knowing this triangle help us?

It helps us because all 45-45-90 triangles are similar. Therefore, every "evaluation" or "solve the triangle" question involving a 45-45-90 triangle or just a 45° angle can be completed by using this triangle. This picture is all you'll need.

For either of the angles, this is the triangle that we start with:

This is a 60-60-60 triangle (that is, an equilateral triangle), with sides having a length of two units.

We drop the vertical bisector from the top angle down to the bottom side:

Note that this bisector is also the altitude (height) of the triangle.

By using the Pythagorean Theorem, we get that the length of the bisector is . And this bisector has formed two 30-60-90 triangles.

When we are working with a 60-degree angle, we use the left-hand triangle above, at it stands, with the base angle (at the left) labelled "α" (AL-phuh, being the funny-looking "a"):

When we are working with a 30-degree angle, we use the right-hand triangle, knocked over to the left, base angle (at the left) labelled "β" (BAY-tuh, being the funny-looking "b"):

You may get one of those teachers who doesn't want you to draw these pictures (because you're supposed to have everything memorized by now). Well, this is why your pencil has an eraser. My Calculus II instructor said that if we drew the pictures on our tests, the entire problem would be counted wrong. I drew the pictures anyway, but very lightly, and erased them all before I handed the tests in. He never knew, and I passed the course. You do what you gotta do.

The pictures above are what I've always used, and many find them helpful. On the other hand, some people prefer tables or other methods. If tables work better for you, then this table comes highly recommended, having been "field-tested" by a working instructor:

To find, say, the sine of an angle measuring forty-five degrees, you would trace across in the "sin" row and down the "45°" column, taking the square-root symbol with you as you go and remembering to include the "divided by 2" from the bottom, to get . The neat pattern of "1, 2, 3" across the top row and "3, 2, 1" across the middle row are meant to help you memorize the table values. Keep in mind that the square root of 1 is just 1, so, for instance, . To find the tangent, you'd divide the sine value by the cosine value.

Another method uses your left hand to essentially do the same thing. With your palm facing you, count off the basic reference angles, starting with your thumb: 0°, 30°, 45°, 60°, and 90°.

For instance, if you're wanting to work with a thirty-degree angle, you'd orient your hand like this:

Since your thumb is folded down, there are 0 fingers to the left, and 4 fingers to the right. Then the values of the sine and the cosine are found as:

Flipping the above would cause division by zero, which isn't allowed. So cot(0°) is undefined.