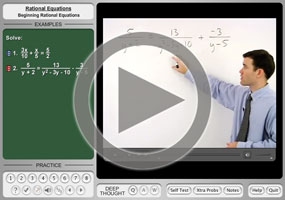 This equation is so simple that I can solve it just by looking at it! How?

This equation has two fractions which are set equal to each other (which can be viewed as a proportion). There are three ways that I can solve this. I'll show each, and you can pick whichever you prefer.

Method 1: Converting to a common denominator:

I can convert to a common denominator of 15:

Now that I have "(one fraction) equal to (another fraction)", I can equate the numerators:

Method 2: Multiplying through by the common denominator:

The lowest common denominator is 15. Rather than converting the fractions to this denominator (something that would be required if I were adding or subtracting these rational fractions), I can instead multiply through (that is, multiply both sides of the equation) by 15. This gives me:

The term "cross-multiplying" isn't technical, and some instructors absolutely hate it. But it's a term you'll hear, and it stands for a technique which can be handy.

This process of "crossing" the "equals" sign with each denominator and multiplying each against its opposing numerator is what is meant by "cross-multiplying". It's a shorthand for "multiplying through by the common denominators, when there are only the two fractions set equal to themselves, and then simplifying what's left", and can be a nice shortcut.

The cross-multiplication gives me the following new (and linear) equation:

So, by each of the methods, my answer is:

This equation has subtracted fractions on the left-hand side, so I can't cross-multiply. Also, there's the new wrinkle of variables in the denominator. This means that I'll need to keep track of the values of x that would cause division by zero. These values cannot be part of my final answer. In this case, the denominators tell me that my answer will have the following restriction:

Method 1: To solve this equation, I can convert everything to the common denominator of 5x(x + 2) and then compare the numerators:

Since x = 4/3 won't cause any division-by-zero problems in the fractions in the original equation, then this solution is valid.

Method 2: The other method is to find the common denominator but, rather than converting everything to that denominator, I'll take advantage of the fact that I have an equation here. That is, I'll multiply through on both sides by that common denominator. This will get rid of the denominators. I've used colors below to highlight the parts that cancel off:

I view Method 2 as being quicker and easier, but this is only my personal preference. In my classroom experience, students have typically been fairly evenly divided in their preferences for Methods 1 and 2. You should use the method that works best for you.