How does place value work with small numbers?

Small numbers can be expressed as fractions, such as ½, or a decimal-place numbers, such as 0.5. That dot between the zero and the five in 0.5 is called a "decimal point", and the 5 stands for "five-tenths". By using that dot, we can now write small numbers using place values, rather than writing them only with fractions. 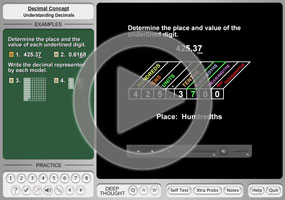 Think back to our fingers-and-marbles model. At each step going to the left, our units grew larger by a factor of 10. We started with 1s (being our fingers), and went to 10s (being the marbles in the first pile, standing for one instance of "all-my-fingers") and then 100s (being the marbles in the second pile, standing for ten times of "all-my-fingers").

So, at each stage leftward, we multiplied by 10. On the other hand, when we go off to the right (that is, when we go into smaller-than-one units), we divide by 10.

To picture this process with the smaller numbers, let's imagine that we're counting packs of candy bars. Each pack of candy bars contains ten individual bars, and each individual bar is formed so as to break neatly into ten pieces. How would we count single bars, or parts of bars, in our fingers-and-marbles model?

Let's say we counted up thirteen packs and two single bars. Remember that "one pack" is our unit; each finger counts one pack of bars.

Each pack is ten bars, so two single bars would be two parts of our "unit"; that is, they're two parts out of the ten parts of what we're calling "1". Using marbles, this time to the right of our hands, to indicate "parts of a pack", we'd count like this:

...but the vertical dividing line looks too much like the digit "1", so instead, let's use a dot:

Note: The use of "and" in this context is important. It indicates that you have a whole-number part, "and" also a smaller-than-one part. The "and" goes between the two parts.

That is, we have thirteen point one seven (or thirteen and seventeen hundredths) packs of candy bars left.

When we're working with numbers smaller than the whole numbers (that is, when we're working with numbers with the "dot" or "decimal point" in them), we have to use zeroes as placeholders after the decimal point. For instance, the fraction "7/100" is written in decimal form as "0.07". If we didn't include that zero between the dot and the 7, we'd be saying "7/10", which wouldn't be what we'd meant. Also, for however many digits we have to the right of the decimal point, that's how many "decimal places" we have.

How are big- and small-number place names related?

Remember: You should use "and" only between the whole-number part of a number and the decimal-places part. The number "108", for instance, is "one hundred eight", not "one hundred 'and' eight".

How is "and" used in decimal numbers in "real life"?

If you've ever written a check, or seen one filled out, you will have seen that the amount of the check is written in two places: in numerical characters inside a box to the right, and as words on the second line of the check. On the line where the amount is written out in words, there is an "and" between the whole-dollar (or the whole-rand, or the whole-naira, or the whole pretty much any other modern currency) portion and the cents portion. This is the only place where "and" is appropriate when saying or spelling out numbers!

(Yes, pretty much every currency has by now been "decimalized". The main currency unit will go by different names in different countries — guilders, pesos, rials, euros, kwacha, whatever — but they all are subdivided into one hundred of a smaller unit — fils, kopeks, naya paisas, metonnyas, satangs, whatever.)

(a) In expanded notation, I need to write each "place" out separately:

Again, note the "and" that went between the whole-number part (being the 47) and the decimal-places portion (being the 3692). This is the only proper place for an "and" within a number name.

a) The 5 is three decimal places to the right of the decimal point. The number 1 followed by three zeroes is 1,000, so:

the 5 is in the thousandths place.

b) Ten is a 1 followed by one zero, so tenths is one decimal place to the right of the decimal point. Then:

the digit in the tenths place is the 8.