To explain the concept of "place value", I'll start with some comparisons. First, let's look at the word "records" in these two sentences:

Security camera 4 records all activity in the rear of the building.

The building's security office saves the records for every shoplifter they've caught in the previous five years. 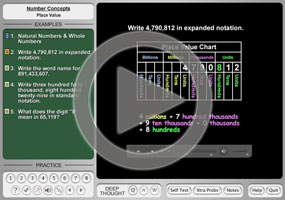 Note also how important the zeroes were. Without the zeroes, the timestamp "00:00:15" would have collapsed into just "15", as would have the other two timestamps. Those zeroes held all the slots (hours, minutes, and seconds) in their proper places, preserving the meanings of the timestamps. Since the value of "15" varies with the place, it is vitally important that those other places not disappear. The zeroes are crucial to the meaning.

Now let's think about counting. When we were little kids, we started counting on our fingers. If we were counting up ("tallying") a larger number of things, we might write down tally marks to keep track:

But once we got into bigger numbers, the thicket of tally marks started being unhelpful.

We could count up to ten on our fingers, but what then? We were out of fingers.

But let's say we had some marbles. Every time we used up all of our fingers, we could go back to fists (zero fingers) and we could put a marble down, standing for "one time of all-my-fingers" (that is, one time of ten).

So three marbles and two fingers would be "three times of ten, plus another two fingers", or "thirty-two", as shown below:

...means "two times of ten-times-of-ten, plus six times of all-my-fingers, plus another four fingers", or "two hundred sixty-four".

Of course, if somebody trips over our piles of marbles, we'll lose count. Once the marbles are no longer in their proper places, we can't tell what values they were meant to represent. It's be just like with the security-tape's timestamps, where we wouldn't have known what each "15" had stood for if somebody had stripped out all the zeroes. This concept that "the value of the marble (or the 15) depends on the pile (or slot) in which the marble (or 15) has been placed" is the point of "place values" in writing number names; namely, the place where the digit has been put tells you the actual value of that digit.