The "interquartile range", abbreviated "IQR", is just the width of the box in the box-and-whisker plot. That is, IQR = Q3 − Q1 . The IQR can be used as a measure of how spread-out the values are. 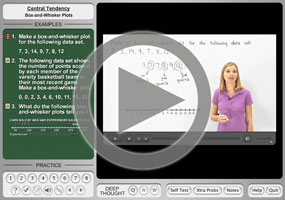 That is, if a data point is below Q1 − 1.5×IQR or above Q3 + 1.5×IQR, it is viewed as being too far from the central values to be reasonable. Maybe you bumped the weigh-scale when you were making that one measurement, or maybe your lab partner is an idiot and you should never have let him touch any of the equipment. Who knows? But whatever their cause, the outliers are those points that don't seem to "fit".

Why one and a half times the width of the box for the outliers? Why does that particular value demark the difference between "acceptable" and "unacceptable" values? Because, when John Tukey was inventing the box-and-whisker plot in 1977 to display these values, he picked 1.5×IQR as the demarkation line for outliers. This has worked well, so we've continued using that value ever since. If you go further into statistics, you'll find that this measure of reasonableness, for bell-curve-shaped data, means that usually only maybe as much as about one percent of the data will ever be outliers.

You can use the Mathway widget below to practice finding the Interquartile Range, also called "H-spread" (or skip the widget and continue with the lesson). Try the entered exercise, or type in your own exercise. Then click the button and scroll down to "Find the Interquartile Range (H-Spread)" to compare your answer to Mathway's.

Once you're comfortable finding the IQR, you can move on to locating the outliers, if any.

To find out if there are any outliers, I first have to find the IQR. There are fifteen data points, so the median will be at the eighth position:

There are seven data points on either side of the median. The two halves are:

Then the IQR is given by:

Then the outliers are at:

The values for Q1 − 1.5×IQR and Q3 + 1.5×IQR are the "fences" that mark off the "reasonable" values from the outlier values. Outliers lie outside the fences.

Your graphing calculator may or may not indicate whether a box-and-whisker plot includes outliers. For instance, the above problem includes the points 10.2, 15.9, and 16.4 as outliers. One setting on my graphing calculator gives the simple box-and-whisker plot which uses only the five-number summary, so the furthest outliers are shown as being the endpoints of the whiskers:

A different calculator setting gives the box-and-whisker plot with the outliers specially marked (in this case, with a simulation of an open dot), and the whiskers going only as far as the highest and lowest values that aren't outliers:

My calculator makes no distinction between outliers and extreme values. Yours may not, either. Check your owner's manual now, before the next test.

If you're using your graphing calculator to help with these plots, make sure you know which setting you're supposed to be using and what the results mean, or the calculator may give you a perfectly correct but "wrong" answer.

To find the outliers and extreme values, I first have to find the IQR. Since there are seven values in the list, the median is the fourth value, so:

The outliers will be any values below:

The extreme values will be those below:

So I have an outlier at 49 but no extreme values. I won't have a top whisker on my plot because Q3 is also the highest non-outlier. So my plot looks like this:

It should be noted that the methods, terms, and rules outlined above are what I have taught and what I have most commonly seen taught. However, your course may have different specific rules, or your calculator may do computations slightly differently. You may need to be somewhat flexible in finding the answers specific to your curriculum.