If your textbook gets really ornate, you may have to delve into some of the more esoteric properties of numbers. For this, you need to know that "the identity" is whatever doesn't change your number at all, and "the inverse" is whatever turns your number into the identity.

For addition, "the identity" is zero, because adding zero to anything doesn't change anything. The "inverse" is the additive inverse: it's the same number, but with the opposite sign. For instance, suppose your number is −6, and you're adding. The identity is zero, and the inverse is 6, because −6 + 6 = 0. 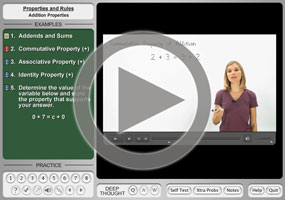 For multiplication, "the identity" is one, because multiplying by one doesn't change anything. The "inverse" is the multiplicative inverse: the same number, but on the opposite side of the fraction line. For instance, suppose your number is −6, and you're multiplying. The identity is one, and the inverse is , because .

You also know (if you've done any equation solving) that you can do anything you want to an equation, as long as you do the same thing to both sides. This is the "property of equality".

The basic fact that you need for solving many equations, especially quadratics, is that, if p×q = 0, then must have either p = 0 or else q = 0. The only way you can multiply two things and end up with zero is if one (or both) of those two things was zero to start with. This is the "zero-product property".

And there are some properties that you use to solve word problems, especially where substitution is required. Anything equals itself: this is the "reflexive" (reflecting onto itself) property. Also, it doesn't matter which order the equality is in; if x = y, then y = x: this is the "symmetric" (they match) property. You can "cut out the middleman", so to speak; if x = y and y = z, then you can say that x = z: this is the "transitive" (moving across) property. Two numbers are either equal to each other or unequal; this is the "trichotomy" law (so called because there are three cases for two given numbers, a < b, a = b, or a > b). And you can plug in for variables, so if x = 3, then 4x = 12, because 4x = 4(3): this is the "substitution" property.

Here are some examples. Note: textbooks vary somewhat in the names they give these properties; you'll need to refer to the examples in your book to know the exact format you should use.

Determine which property was used.

They didn't change anything, so this is an identity. They multiplied, so this is:

This is obvious: anything equals itself. They used:

They only switched sides; they didn't actually change anything. All they did was swap across the "equals" sign. They used:

They didn't change anything, so this is an identity. They added, so they used:

You might be torn here between the transitive property and the substitution property. If you look closely, they didn't say that 2(a + b) equalled something, which then equalled 3c. Instead, what they did was substitute the "9" from the second equation for the "a + b" in the first equation, so they used:

the additive property of equality.

If they'd just given me the first equation and asked me to solve it, I'd have subtracted 2 from both sides, and simplified to get x = 8. Here, they've made things complicated. But all they've really done is show only the left-hand side of the subtraction (or, to be technical, the addition of a "minus" number), leaving me to figure out that they're wanting me to picture the right-hand side and given them their answer. Since all they really did was add the same thing to both sides, they got:

x = 8 by the additive property of equality.

They set the quadratic equal to zero, factored, and then solved each factor. This is:

the multiplicative property of equality.

By the trichotomy law, there are only three possible relationships between x and y (namely, to be greater than, to be equal to, or to be less than), and they've eliminated two of these options. Then:

I can do this in either of two ways: multiply both sides by (the multiplicative property of equality) and then get x = 0, or I could say that, since 5 doesn't equal zero, then x must equal zero (by the zero-product property).

You might be torn here between the transitive property and the substitution property. But what they did here was "cut out the middleman" by removing the "y" in the middle; they said that 3x + 2 = y = 8, and then deleted the "y" in the middle, transiting right over it to create a new equation. They used:

To solve the equation, I would multiply both sides by the same value (a negative one), to cancel off the minus sign. So:

x = −14, by the multiplicative property of equality.

By substitution (that is, by plugging the numbers in for the variables), I get (3)(−4). In other words:

By the reflexive property, x = x. By the trichotomy law, if a = b then a cannot be less than b. So the answer is:

no, by the reflexive property and the trichotomy law.

Don't let the seeming pointlessness of these questions bother you. Instead, view this stuff as "gimme" questions for the next test.