Sometimes you need to find the point that is exactly midway between two other points. For instance, you might need to find a line that bisects (divides into two equal halves) a given line segment. This middle point is called the "midpoint". The concept doesn't come up often, but the Formula is quite simple and obvious, so you should easily be able to remember it for later. 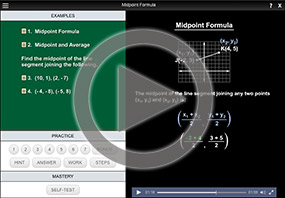 The Midpoint Formula works exactly the same way. If you need to find the point that is exactly halfway between two given points, just average the x-values and the y-values.

First, I apply the Midpoint Formula; then, I'll simplify:

Technically, the Midpoint Formula is the following:

The Midpoint Formula: The midpoint of two points, (x1, y1) and (x2, y2) is the point M found by the following formula:

But as long as you remember that you're averaging the two points' x- and y-values, you'll do fine. It won't matter which point you pick to be the "first" point you plug in. Just make sure that you're adding an x to an x, and a y to a y.

The y-coordinates already match. This reduces the problem to needing to compare the x-coordinates, "equating" them (that is, setting them equal, because they must be the same) and solving the resulting equation to figure out what p is. This will give me the value necessary for making the x-values match. So:

Let's do some more examples....