Mean, median, and mode are three kinds of "averages". There are many "averages" in statistics, but these are, I think, the three most common, and are certainly the three you are most likely to encounter in your pre-statistics courses, if the topic comes up at all.

The "mean" is the "average" you're used to, where you add up all the numbers and then divide by the number of numbers. The "median" is the "middle" value in the list of numbers. To find the median, your numbers have to be listed in numerical order from smallest to largest, so you may have to rewrite your list before you can find the median. The "mode" is the value that occurs most often. If no number in the list is repeated, then there is no mode for the list. 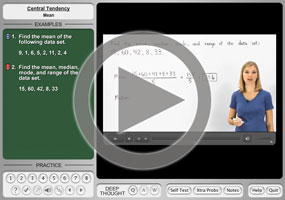 The "range" of a list a numbers is just the difference between the largest and smallest values.

The mean is the usual average, so I'll add and then divide:

Note that the mean, in this case, isn't a value from the original list. This is a common result. You should not assume that your mean will be one of your original numbers.

The median is the middle value, so first I'll have to rewrite the list in numerical order:

The mode is the number that is repeated more often than any other, so 13 is the mode.

Note: The formula for the place to find the median is "([the number of data points] + 1) ÷ 2", but you don't have to use this formula. You can just count in from both ends of the list until you meet in the middle, if you prefer, especially if your list is short. Either way will work.

The mean is the usual average:

The median is the middle number. In this example, the numbers are already listed in numerical order, so I don't have to rewrite the list. But there is no "middle" number, because there are an even number of numbers. Because of this, the median of the list will be the mean (that is, the usual average) of the middle two values within the list. The middle two numbers are 2 and 4, so:

The mode is the number that is repeated most often, but all the numbers in this list appear only once, so there is no mode.

The largest value in the list is 7, the smallest is 1, and their difference is 6, so the range is 6.

The values in the list above were all whole numbers, but the mean of the list was a decimal value. Getting a decimal value for the mean (or for the median, if you have an even number of data points) is perfectly okay; don't round your answers to try to match the format of the other numbers.

The mean is the usual average, so I'll add up and then divide:

As you can see, it is possible for two of the averages (the mean and the median, in this case) to have the same value. But this is not usual, and you should not expect it.

Note: Depending on your text or your instructor, the above data set may be viewed as having no mode rather than having two modes, because no single solitary number was repeated more often than any other. I've seen books that go either way on this; there doesn't seem to be a consensus on the "right" definition of "mode" in the above case. So if you're not certain how you should answer the "mode" part of the above example, ask your instructor before the next test.

About the only hard part of finding the mean, median, and mode is keeping straight which "average" is which. Just remember the following:

(In the above, I've used the term "average" rather casually. The technical definition of what we commonly refer to as the "average" is technically called "the arithmetic mean": adding up the values and then dividing by the number of values. Since you're probably more familiar with the concept of "average" than with "measure of central tendency", I used the more comfortable term.)

The minimum grade is what I need to find. To find the average of all his grades (the known ones, plus the unknown one), I have to add up all the grades, and then divide by the number of grades. Since I don't have a score for the last test yet, I'll use a variable to stand for this unknown value: "x". Then computation to find the desired average is:

Multiplying through by 5 and simplifying, I get:

He needs to get at least a 79 on the last test.

You can use the Mathway widget below to practice finding the median. Try the entered exercise, or type in your own exercise. Or try entering any list of numbers, and then selecting the option — mean, median, mode, etc — from what the widget offers you. Then click the button to compare your answer to Mathway's.